There are quarter of a million jobless people. In a typical quarter, about 250,000 people start new jobs. Does that mean we can eliminate joblessness in a quarter? Of course not, but that’s what National is telling you when they rabbit on about there being 10,000 jobs on Trademe.

The Nats are trying to confuse churn for net gain. Just as new jobs are being created and vacancies open up every day, so jobs are eliminated and vacated all the time. This is the normal churn of things as Kiwis change jobs an average of once every two years. To get joblessness and benefit numbers down you need a net increase in jobs.

And National has failed to deliver that according to the Linked Employer-Employee Dataset, which tracks job entries and exits – 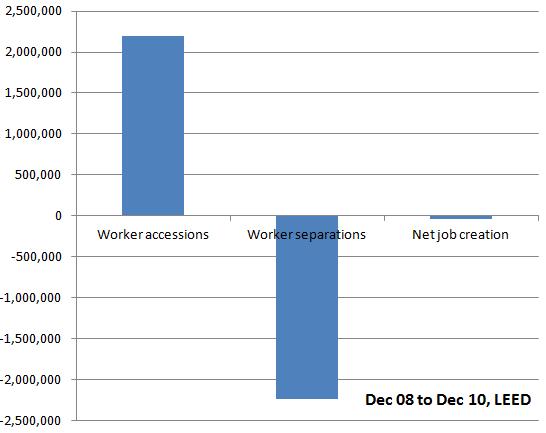 National wants to look at just one half of the equation – the number of worker accessions. But that rather misses the bigger picture, eh? It’s the same thing when Bennett says ‘10,000 people came off the dole last month’ but fails to mention the 11,000 who went on it.

There were a net 41,000 fewer jobs at the end of 2010 compared to 2008, according to the LEED. That’s pretty similar to the decrease in the number of jobs between when Key came to power in 2008 and now, according to the National Employment Indicator – so the situation hasn’t dramatically improved in the last year.

So, it’s all very well for Key and Bennett to say ‘there’s 10,000 jobs on Trademe’. I should bloody well hope there are because we need that level of churn just to stay in one place. But, if we are really to see a reduction in the number of people jobless and on benefits, up 60,000 and 80,000 respectively since National came to power, then we’ll need a lot more than 10,000 jobs advertised at a given point in time.

And we’ll need a government committed to job creation, not silly statistical games.