Why the Right wants to deny that unions increase wages

I don’t waste time on Slater’s newest graph except to say he’s mashing two different years’ figures together and he’s going so far back he’s trying to get National to claim credit for most of Labour’s third term.

And here’s the result: 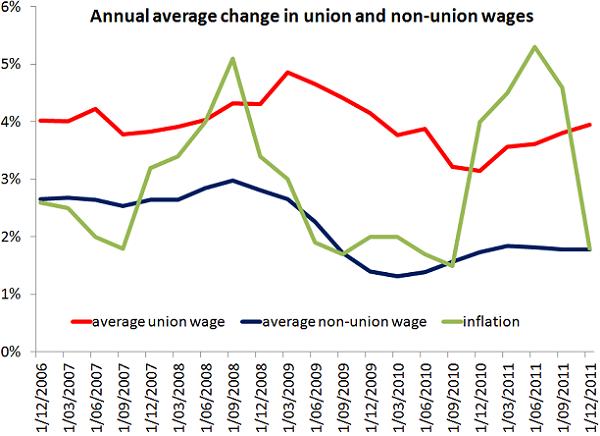 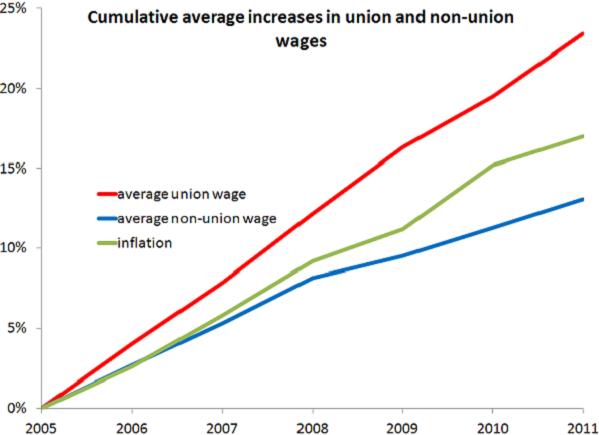 So, union wage rises beat non-union every time. I’m not sure why that should even be slightly controversial, much less outrageous to the Right. It’s basic market theory, after all. If workers bargain individually they are in perfect competition with each other and become price takers. If they bargain together, they can exercise market power to balance the market power of the employer. Hence the saying: “united we bargain, divided we beg”.

I thought the Right understood markets….

In fact, they do, and that’s exactly why the neoliberals are so keen on breaking the unions and why John “love to see wages drop” and the bosses are making a big anti-union play this term. They know that unions mean higher pay. But they don’t want you knowing that.

Without unions, wages would have increased only around 13% since the end of 2005 (probably much less because so much of the raises non-union workers get is pass-on of union wins and unions fight strongly for minimum wage hikes) when they have actually increased by 16.6%. With total employee pay being about $90 billion a year, that 3.6% difference would have been over $3 billion a year out of working families’ pockets and into the profit lines of the business elite.