The Roy Morgan poll for August is now out.

During August support for National jumped 7.5% to 50.5% now well ahead of a potential Labour/Greens alliance 38% (down 7%) according to the latest Roy Morgan New Zealand Poll. Support for the major parties in August has returned to close to the levels of support in June…

If a NZ Election were held now the latest New Zealand Roy Morgan Poll shows that the National Party would easily be returned to power. 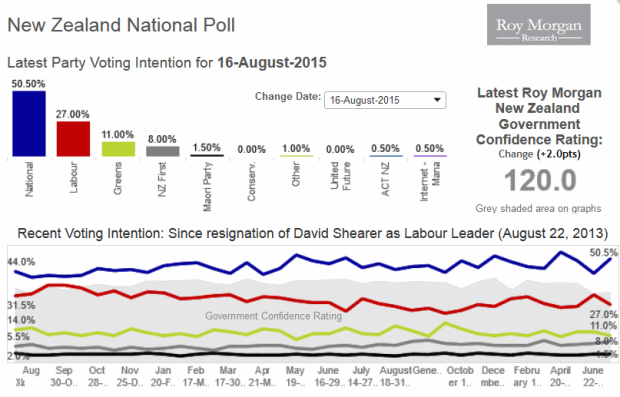 At least United Future and the Conservatives both register exactly as much support as they deserve: 0%. The meltdown of the Conservatives will probably have shunted a few voters towards the blue team, as well.

No doubt many in the Labour caucus will be disappointed their carefully planned and media managed Chinese house buyer ploy and the massive amount of airtime that generated for Labour over several days had no positive effect – and may have even undermined the positive momentum for the Opposition noted in the July Roy Morgan.

The main positive for the Left is that the Government Confidence Rating remains weak at 120. Having said that, a long stream of economic bad news locally and from around the world hasn’t hurt the Key Government one bit. My prediction is that if we have a global market meltdown in Sept/Oct, National’s “safe hands” meme will be the one that gets pushed hard through the MSM.

Maybe it’s time to offer voters something other than carefully scripted, market-led, growth fixated, neoliberal-lite? A bit of Corbyn, a bit of angry, and a bit of cut the crap mongrel might make people sit up and take notice.