Not my family, bro 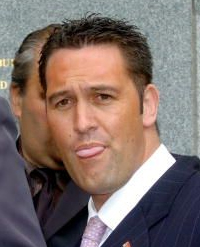 Radio Live reports that Richard Lewis and his Destiny Party have decided to form a new Christian party, this time without Gordon Copeland.

They’re calling it the ‘Family Party’ and are trying to pose as a broad-based Christian movement. They have obvious reasons for doing so, but in politics it’s the money and the troops on the ground that matter – and Destiny has easily enough of both to make sure the party stays firmly under their control.

Lewis says the party intends to target the Manukau and Mangere electorates with policies focusing on ‘the rise in prostitution, street gangs, alcohol and drug abuse.’ There’s no mention of how the Family Party intends to tackle the poverty wages, insecure work hours and casualisation that lie beneath these social problems, but I suspect Lewis doesn’t really care. After all, he was happy to lead Destiny into the last election with an economic platform that was decidedly unfriendly to the families he claims to represent.

Former United Future MP Paul Adams has been announced as the party’s deputy leader. He’s that dude who went on a fast against the Civil Union Bill. Judging by this article from the Dom Post (Aug 7, 2002) he should fit in just fine:

[Adams] refused to say whether he stood by his views on locking up Aids sufferers and homosexuality being wrong, but said classrooms lacked male role-models and so he would not want a cross-dresser teaching his children. He said yesterday Aids sufferers should be publicly identified. “I think it’s only fair”

They can call their party whatever they like, but kicking the poor and beating up on the weak aren’t my family values. And I suspect they’ll soon find the good people of South Auckland don’t think so either.