Trotter in the Independent

Apologies to The Independent Financial Review and to Chris Trotter for this rather large cut and paste from the second half of his article but it’s good stuff. If you enjoy it perhaps you’ll consider either buying or subscribing to the The Independent.

The Press political editor Colin Espiner, in his “On the House” blog, has characterised the government’s counter-attack as a case of the Labour pot calling National’s kettle black: “For the fact is this Labour government is every bit as donkey-deep with the private sector as the previous National government and very probably the next one. Labour’s record of selling state assets is no better (or worse, depending on your point of view) than National’s. Labour insists on the tendering of services provided in the state sector, just as it should.”

There is, of course, a huge difference between the state seeking tenders from the private sector for the creation of assets which remain under public control, and the state being willing to guarantee a hefty return to private sector investors, for periods of up to 40 years, in return for providing services which citizens believe themselves to be entitled to by right – such as health, education and housing – and which the state can provide at a much more competitive price.

The first Labour government may have awarded Fletcher Construction the contract for building the first state houses, but, having built them, the company was not then given the right to pocket the rent for the next four decades, or sell the properties back to the state at a profit.

Certainly, the National Party of the 1930s never saw Labour’s state housing scheme as being anything other than “socialist”. Nor were the scheme’s socialist credentials in any way compromised by the participation of the Fletcher family business. If anything, the reverse was true.

Unfortunately, nuanced ideological argument is all-too-rare in today’s Press Gallery and almost unheard of in the blogosphere.

“[To] argue that the private sector doesn’t have some expertise that can be used for the benefit of all,” opines Espiner, “is – well, socialist, I guess. And that’s fine. Its a legitimate political philosophy with a proud pedigree, if somewhat chequered in practice. But I doubt Labour in 2007 would accept such an epithet.

“Which is why I can detect a certain whiff of a word beginning with ‘H’ around the Beehive at the moment. It’s a word which you’re not allowed to use in Parliament but I can here – hypocrisy.”

The New Zealand Labour Party’s facility for creating socialist institutions by harnessing the support, expertise and resources of the private sector, is one of the key accomplishment which distinguishes its own “proud pedigree” from the more “chequered” histories of less successful socialist and social-democratic parties.

Indeed, it was its habit of close co-operation with patriotic capitalists such as the Fletchers that made New Zealand Labour so susceptible to the blandishments of its New Right advisers in the 1980s.

Many of the supporters of Rogernomics firmly believed the party’s traditional socialist objectives could be achieved as they had been in the past by enlisting the expertise of the private sector.

It was only when they realised, as David Lange did, that the private sector was hell-bent on swallowing up the entire public sphere – including health, education, housing and even social welfare – that they struggled to shake themselves free of the New Right’s grasp. 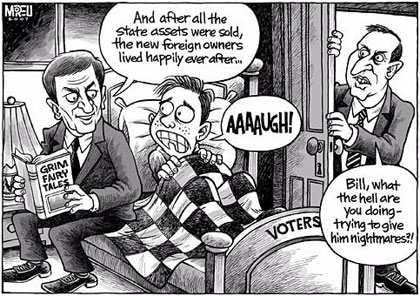