NZ and the emissions scams

Yesterday in The Herald:

New Zealand has achieved its first round of emissions reduction targets and is on track to meet its 2020 target, Climate Change Minister Paula Bennett says.

In the first commitment period in the Kyoto Protocol, New Zealand had to reduce its greenhouse gas emissions to 1990 levels between 2008 and 2012.

Mrs Bennett said the target was reached through a combination of emissions reductions, the capture of carbon through forestry, and international trading.
…
The ministry said New Zealand’s greenhouse gas emissions had increased by more than 42 per cent since 1990, but these had been offset by carbon sequestration and the purchase of carbon credits.

New Zealand’s dependence on buying carbon credits has been criticised by some climate scientists, who described them as “hot air” credits which do nothing to reduce atmosphere-warming emissions. …

The Herald piece briefly identifies the problems with the claim that we meet our targets. I/S at No Right Turn went much further with two excellent posts, which are reprinted (with permission and full acknowledgement of his work) below.

The government released a pile of climate change reports today on its Kyoto Protocol CP1 and CP2 (to which we are not a party) obligations. And they expose the naked fraud which lies at the heart of our climate change policy.

First up, Kyoto. Under the Kyoto Protocol, New Zealand had accepted a target of limiting its net average emissions over the to 2008 – 2012 period to gross 1990 levels. Which in practice meant a target of 309.5 million tons over five years. So how did we do? Our emissions kept increasing, and in fact increased by around 20%, but thanks to the net-gross scam, we were able to use forest reductions to cover that. So, we met our CP1 target, fairly, within the (broadly accepted) Kyoto rules. And according to those rules, the surplus can be “banked” against targets for later commitment periods.

But then the real scam begins. Because according to our CP1 “true-up” report, we paid for a huge chunk of our emissions with international units. Most of this is ERU’s under Kyoto’s Joint Implementation mechanism, and a staggering 86.3 million tons of that came from the Ukraine – where huge amounts of credits were issued fraudulently and as part of an international criminal scam. But we’re also using 16 million tons of Kyoto Certified Emissions Reductions issued under the Clean Development Mechanism. These are also hugely problematic – around 50% of CERs were issued for destruction of refrigerant gases – gases which had been produced solely so they could be destroyed for credit. Which is why such “credits” are no longer accepted, and cannot be used in Kyoto’s second commitment period.

But Kyoto CP1 Assigned Amount Units can. And by paying for our CP1 obligation with these dubious and possibly fraudulent credits, New Zealand has assured that it has a huge surplus of AAU. 123.75 million tons worth, or about two years worth of emissions. And predictably, we’re using this banked credit to “pay” to “meet” our self-imposed CP2 target: 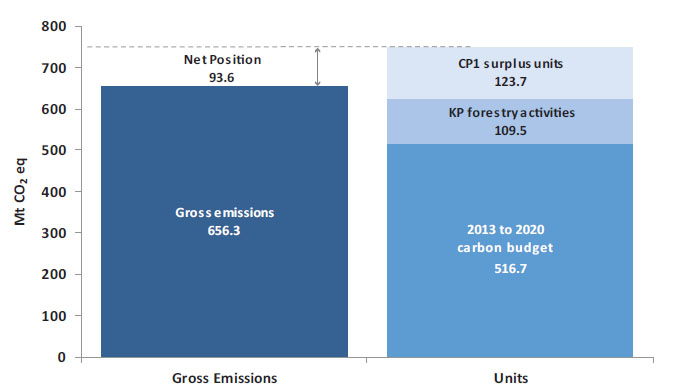 Or, to put it simply: we bought fraudulent credit in CP1, we laundered it into AAU, and we’re effectively using it to pay to meet our CP2 reductions. And then we’ll no doubt try and carry over that surplus (plus any other fraud we can launder) to pretend to meet the (self-imposed, not legally binding) 11% by 2030 target we offered at Paris. And meanwhile, our emissions will just keep on rising.

And this is why other countries no longer support international carbon trading: because its an outright scam. And the fact that New Zealand’s climate change policy is based on it speaks volumes about both our honesty and our commitment to real change.

Earlier today I highlighted the New Zealand government’s climate change policy of paying its Kyoto bill with dodgy (and now banned) “emissions reduction” units while banking AAU (which will then be used to pay for future targets). So how dodgy are the units we’re using? We’re literally claiming emissions reductions for burning coal.

As noted earlier, the credits we’re turning over include 86.3 million tons of “reductions” from the Ukraine – which is noted for being particularly dodgy. The raw data is here [XLS], and project details are in the Ukranian JI Registry. I’ve extracted this data for the top 20 projects NZ has purchased emissions “reductions” from here. Those projects account for 61.4 million tons of emissions – or roughly a year’s worth. And eleven of them claim reductions for “spontaneous ignition of coal waste piles”.

What does that mean? The Stockholm Environment Institute working paper referred to in that Guardian article has the details. It means:

The Institute’s conclusion: “we rate additionality of this project type as not plausible and overcrediting likely to be significant”.

New Zealand is claiming at least 31.2 million tons of “reductions” form this bullshit – half a year’s emissions.

But it gets worse. The Stockholm Institute identifies four types of projects as having “questionable or low environmental integrity”: spontaneous ignition of coal waste piles, energy efficiency in industry and power production and distribution, and natural gas transportation and distribution. Eighteen of the twenty largest Ukranian projects New Zealand purchased “reductions” from (totalling 51.3 million tons) fall into these categories. One is a “no-tillage” agriculture project, which the Institute notes are deliberately misclassified in Ukraine to allow the credits to be fraudulently sold onto the EU market. And the final one, for “Implementation of Energy-Saving Light Sources in the Public, Corporate аnd Private Sectors of Ukraine”, appears to have issued twice as many credits as its expected reductions. Basicly, we’re paying our bill with bullshit and fraud.

Note that the government probably didn’t buy these credits itself – they were likely turned over by participants in the ETS to pay for their emissions. But the government has chosen to use them to cover our Kyoto emissions, in order to be able to bank its AAU and claim it as a reduction later. And given that it has now banned these types of credit, it did so in full knowledge of how dubious they are. The effect this will have on our international reputation is left as an exercise for the reader.

11 comments on “NZ and the emissions scams ”