The Herald seems to have accidentally deleted the online version of yesterday’s big story from Kirsty Johnson on how the government manipulates media perceptions. However could that have happened?

The original link is now 404 (as of last night). Fortunately various web sites have archived this very interesting piece. Education Aotearoa have the best coverage, see also Pastebin and The Herald on Facebook.

As a public service we’ll archive it here too. Required follow-up reading on No Right Turn.

A damning report by an education watchdog about babies and toddlers was partially rewritten after high-level meetings about its “risk” to the Government.

Documents show Ministry of Education advisers also tried to mitigate the impact of the Education Review Office report by planting good-news stories to balance negative media coverage, and carefully crafting a communications “narrative” during “war-room” meetings before its release.

Politicians and sector experts say the behaviour is concerning, and have raised queries about potential political interference in an independent body, plus a lack of transparency at the agencies.

The departments involved have rejected allegations of interference. The ministry said any changes made were a “decision for ERO”.

The ERO said “neither the Ministry of Education nor the minister directed or influenced the report in any way”.

The circumstances surrounding the release of the ERO report, “Infants and toddlers: competent and confident communicators and explorers”, were revealed in emails between ministry staff that the Herald obtained under the Official Information Act.

They show staff frantically planning for the release of the study – which found almost half of early childhood centres were not doing enough for under-3s in vital developmental areas, and therefore not meeting their curriculum requirements.

The most recent study was undertaken in early 2014. ERO sent it to the ministry in February this year, after peer-review and consultation. It initially recommended the ministry use the findings of the evaluation to “form policy development impacting on the education and care of infants and toddlers”. This then changed, with ERO suggesting the report be shared with the Advisory Group on Early Learning, with emphasis on the curriculum. Initial communications plans were drafted, but it then sat in limbo until July, when ERO decided to make it public. The report was sent to the minister’s office on July 31.

Here is the response to an OIA request Herald reporter Kirsty Johnson received from the Ministry of Education. 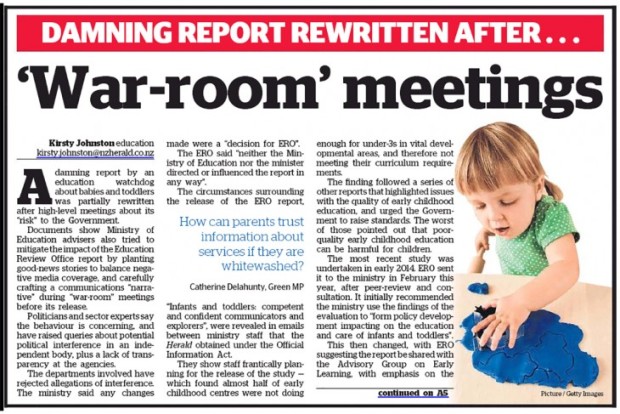