June 8 is the anniversary of Aotearoa’s 1987 nuclear-free legislation. NZOnScreen is running a retrospective of our proud history, the Nuclear-free Collection. It is well worth a watch. I particularly liked the movie “Nuclear Reaction,” with Big Norm seeing off the French, Big Dave seeing off the Americans and Kiwi Keith was clear about where we stood. The nuclear risk is worse now than it has ever been.

Joe Biden recently told the Japanese Prime Minister that the US stood ready to defend them even to the point of nuclear war.

The United States restated its unwavering support for Japan’s defense under the U.S.-Japan Treaty of Mutual Cooperation and Security, using its full range of capabilities, including nuclear.

That must have thrilled the Japanese. Nuclear madness is alive and well, with the US spending trillions to upgrade its nuclear arsenal, and the UK increasing their stockpile of warheads. What a waste – weapons that can’t be used, because if they are we are all dead.

Now that the US has shifted its strategic position from the ‘war on terror’ to ‘extreme competition’ with the named states China, Russia, Iran and North Korea and the antagonistic narrative heats up we are moving back to the high risk environment that categorised the anti-Soviet ‘cold war.’ The Bulletin of Atomic Scientists’ Doomsday Clock is closer to midnight than it has ever been. War talk is back in Australia and the US.

The anti-nuclear movement today is but a pale shadow of the 70’s and 80’s. 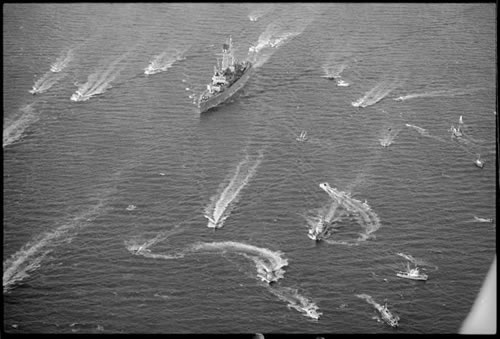 I remember sailing around the nuclear cruiser Truxtun with Fran Wilde in Jim Kebbell’s boat as it entered Wellington harbour.

We have banned those vessels from our harbours so while don’t see it up close the risk they brought is still very much alive.

It doesn’t matter if the  bombs erupt in the South China Sea as global winter will bring an early end to life on our planet.

I’m grateful to NZOnscreen for the reminder of when Aotearoa/New Zealand stood strong for peace.