Power prices having been rising much more quickly in NZ than in other OECD countries. With the current privatisation of state owned generators, the problem will get worse not better. Something needs to be done.

At noon today Labour and the Greens jointly announced new energy policies. “NZ Power” is big and it’s bold. It will completely restructure the way the electricity sector is run, and result in lower power prices for both domestic and business consumers.

Key Points of Labour’s Solution
• A new agency called NZ Power will act as a single buyer of wholesale electricity. It will also have the power to set prices based on operating costs and a fair return on capital.
• NZ Power will introduce a new pricing system where electricity companies get a fair return and consumers finally get a fair go.
• These measures will also encourage more competition among retailers.

Impact of Policy
• Power prices for the average household will drop by $230 – $330 a year.
• Businesses will also see prices lower by between 5 and 7 per cent on average.
• This policy will create 5,000 jobs and boost the economy by $450 million per annum.

The projections for the impact on the economy have been independently costed by Business and Economic Research Limited (BERL).

It’s important to note that this model of a state run wholesale buyer / distributor is in place and working in other countries (including South Africa and Brazil) and some states of America (California, Virginia). This model can and does incorporate planning and funding of future generation capacity.

Why now, after Labour let prices rise during it’s nine years in office? Because it’s a new leadership with new ideas. And because with the privatisation of the sector (profits heading off-shore instead of being spent on health and education), prices are set to rise even faster in the future if nothing is done.

The downside is that share prices are likely to be affected. There is no way to control the prices that generators can charge without also impacting their profits, and therefore possibly their share prices (the markets will decide). That is why the policy is being signaled now. It isn’t an ambush and it isn’t “sabotage”. It will be put to the electorate in 2014, and investors have plenty of advance warning, time to respond.

This is a great example of Green / Labour cooperation – hopefully a model for the future! It’s a classic left wing / social democratic policy which sees a role for government in making life better for people. The market model has failed in the electricity sector. It’s time for a change. Bring on NZ Power!

Update: The Greens policy release is here. Labour’s is here. Between them they have plenty of supporting information and documentation.

This is their first joint announcement of a major policy plank for a Labour/Green Government, essentially creating the bones of a coalition government in waiting for the first time. It transforms the political landscape and signals what would be the biggest re-intervention in the New Zealand economy since its deregulation began under Labour in 1984.

The CTU welcomes new thinking from the Labour and Green Parties today to reduce power prices. It is long overdue.

Bill Rosenberg, CTU Economist says “New Zealand residential electricity consumers have suffered from the reliance on an electricity ‘market’ which has failed to deliver low cost electricity for much too long now. Low income families lose the most to power companies as a proportion of their incomes. We welcome these policies to lower the high cost of electricity. Just as we support fair wages we welcome initiatives that will ease the burden of unfair prices on low-income families and reduce inequality.”

Labour and the Greens are promising a major intervention in the retail power system in a bid to lower residential power prices if they win next year’s election. …

Mr Shearer said Labour had been working on the plan for some time and it was not an attempt to derail the Government’s Mighty River share offer which began this week or the wider asset sales plan.

He said it was the biggest market intervention Labour would make. 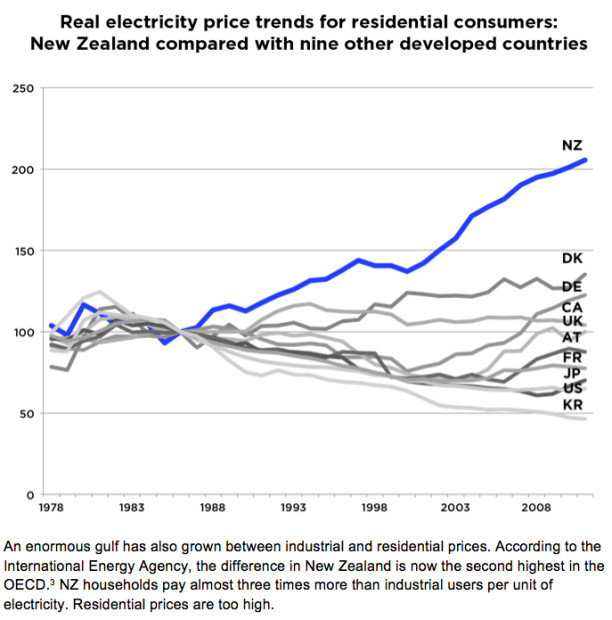