On the crotch-clutcher Bob Clarkson 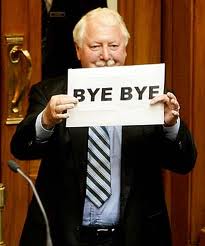 Oh shit, I thought we’d gotten rid of this wonderful politician with a talent for publicity from politics.

Toad at g-blog puts it more eloquently than I*

Former National MP Clarkson was the subject of sexual harassment allegations made by a former employee. Clarkson claimed the allegations were the result of a misunderstanding arising from a mention of his left testicle to a colleague. Clarkson, in the heat of the controversy, grabbed and talked about his crotch to a female reporter.

Clarkson’s sure to work wonders to improve ACT’s 0.00% polling among female voters achieved in the latest Herald Digipoll.

If you want to understand this paragon of how not to be a good politician, then look no further than Steve Pierson farewelling him with the light hearted words

His departing speech to National party delegates thanked the Exclusive Brethren for their help – which was one of those political foot in the mouth occasions that always left his audience reeling.

As Dancer pointed out about his attractiveness to woman voters.

So there would have been a sigh of relief in National circles that they can now distance themselves from comments such as these from declared departee Bob Clarkson:

“I don’t want to be mean… but what makes me struggle is why does Labour favour the hairy-legged ladies?… I cross-examine some of these ladies in the select committee, and guys for that matter, and they’ve got warped bloody minds…”

Part of the polling success for National has been their appeal to women who have traditionally been more likely to be Labour supporters.

If I was in the Act party, I’d be very happy about how such a astute political operator adds to their appeal. Fortunately they really don’t appear to have any, especially to the women.

* Sorry toad, I was going to quote you. But you wrote the post so short and sweet that I gave up and quoted the whole thing.

33 comments on “On the crotch-clutcher Bob Clarkson ”