Our man in Paris

Some time today, New Zealand’s Prime Minister, John Key, will be wandering around the hallways of his Paris hotel in his underpants. Or maybe his swimming togs.

Its tough to get  leadership “face time” at international events and John’s dress-code is part of his unique way of promoting New Zealand. By “accidently” bumping into world leaders who are staying at the same hotel, John immediately demonstrates first hand just how laid-back and casual Kiwis are. Should the world leader not run away, John then reminds Presidents and Kings alike just how happy he is as “junior world leader” to service their every need. Sheep farm in the middle of a desert in a land run by a despot who funds terrorists? No worries. Anything at all. Especially for any leader who would be be kind enough to actually talk to him. Even better, perhaps they could say something nice so he’s got material to feed the chooks with later on. The “media chooks”, that is.

He’s had a busy time in Paris, extolling the need to reduce fuel subsidies and shifting that public money into “the market” via privatised science. He also promised $200 million for “climate-related” development in the Pacific. Whether that means there will be new charter schools set up throughout the region to teach kids swimming skills is unclear at this stage.

John also tagged along to a tribute in honour of those killed in Paris on 18 November. Australian Prime Minister, Malcolm Turnbull, was there, loaded down with a glorious bouquet made up in the resplendent gold’n’green of the Lucky Country. Not wanting to interfere with the flag referendum back home, John brought a lovely wee posy in . . . umm . . . black and white, 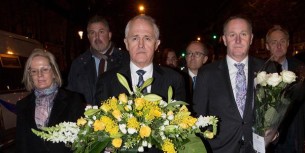