Normally I can’t stand reading Kerre Woodham or the Herald on Sunday. Both encapsulate the lowest common denominator of the ‘news’ that is trivial and banal. However I have to agree with Kerre’s ‘analysis’* today in the Herald on Sunday – “‘Party central’ has all the appeal of a mid-life crisis“.

Why, if you are an international rugby fan, would you leave Eden Park and hop on a train, eschewing the delights of Kingsland’s cafes, going directly past the thriving night life of Ponsonby and taking a right on to a bleak windswept wharf instead of a left to the maelstrom that is the Viaduct?

What I know for sure is that if I was looking to have a good time, a contrived party place on Queen’s Wharf, decked out like the school hall for the fourth form social, would not be my first port of call.

Setting up a tacky venue away from the rest of the city and having John Key calling out to the peeps that the party is going down over here is just another tragic failure on the part of our nation’s, and our city’s, leaders to get things right.

Exactly the point I would make. Sure I’m known for being anti-social. And I stopped watching sport when I stopped playing. Being vicariously involved in other peoples performances with a minimalistic plot line has zero interest to me. It is boring.

But this is a pretty common Auckland set of traits. We’re more interested in getting on with life and work than prancing around doing things simply because they look cool. People who think like that are herded in the Parnell ghetto – like John Key.

But leaving my own preferences aside, and like Kerre, I find it hard to see the attraction of hanging out on a cold wharf. It is a bloody ludicrous idea. It might have looked like a good idea from the perspective of Wellington. But they’re pretty nuts there, and many of our exiled politicians seem to go nuts on arrival there (the famously ineffective McCully being a good example).

There are a hell of a lot better places to be around in Auckland. I fail to see any attraction in standing around some old woofters talking about sport and getting pissed. If you wanted a place to have a bit of vitality out of the wind (the Viaduct Events Centre also looks pretty damn cold when the weather is crap), then set up a temporary structure in Aotea Square overflowing into the Aotea centre (or vice-versa) and isolate the party poopers from the fun going on around the rest of Auckland.

Sure it’d be good to remove the Queens Wharf from its current state of being a dead hole at the bottom of town. But that doesn’t require setting up a temporary school ballroom. Just build a passenger terminal with the intent of encouraging the frequent cruise ships occupants to give up their cash. That is a simple commercial proposition to be done with the assistance of local government. Moreover it will probably increase revenues over the long term rather than for a few days around a single event.

But the whole exercise of a ‘party central’ seems like a pointless exercise in wasting my taxpayer and rates dollars. Most Aucklanders seem to think much the same. The development of Queens wharf is something that can wait until we’ve elected our new council and sorted out the details of the ambiguous and incomplete governance that Rodney Hide has foisted on Auckland (another Auckland politico who seems to become more nuts since exile to Wellington). 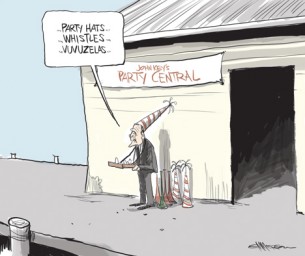 I really don’t care how much it hurts John Keys ego to see another one of his bright ideas get flushed down the ineffective toilet – he must be used to it by now. Just look at the cycleway and the jobs summit for examples. Stop wasting energy, resources, and effort on a bloody stupid idea just because John Key seems to think it is a good idea. History shows that they aren’t.

* Filed in the property section of the NZ Herald website – what is with that?