A new political blog has appeared.  But rather than involving a fresh presentation of new ideas in an attempt to engender debate this blog has three tired old has beens who are well past their use by date engage in some climate change denial and race baiting.

Rodney Hide continues to provide extreme analysis free right wing ramblings courtesy of the Herald.  Is it time for them to reintroduce a left wing columnist?

If we tax the multinational corporations will they leave?

TS regular SaveNZ looks at the background to the massive cost overruns in the Auckland Council’s IT department. It’s not about the democratic processes of council; it’s because the Supercity was set up to fail.

Rodney Hide suggested in the Herald this morning that if James Shaw was leader of the Greens there would be a greater chance they could go into coalition with National.  James Shaw does not think so.

The John Key led National Government is showing signs of third termitis.  Symptoms are a confusion of the national interest with National Party political interests, a willingness to sell state houses and pay the proceeds to large corporates when even your best friends are saying don’t, a staleness and inability to handle issues properly and being completely bereft of new ideas to improve the country.  The condition is almost inevitably terminal.

Police Commissioner Mike Bush has essentially confirmed that under the no surprises policy the Police told either Anne Tolley or Michael Woodhouse or both about the Police investigation into Mike Sabin. The issue will be when they were told. If this occurred before the time that Labour told the Prime Minister’s office about Sabin’s difficulties the veracity of what John Key has told us will have to be questioned.

You have to look at the “taxpayers union” and ask how even the idiots who were behind ACT think that they can play the same trick to a new generation. But Jordan Williams seems to think that despite the law, Len Brown should pay for a Auckland council ordered audit of the mayoral office. Perhaps he should actually read the law about the supershitty that ACT foisted on Auckland ratepayers. Reading the law may prevent another legal failure from the lawyer who lost for Cameron Slater.

The Herald continues its tabloid-style vendetta against Len Brown by serving up non-news in a shock-horror frame to make the mayor look bad. With a combination of the delicate removal/rewriting of what was said and a a senile loss of memory about the chains imposed on Auckland by National, Act and Rodney Hide – the Granny Herald continues its downward slide into irrelevance.

There is science, and then there are dickheads

Over the last three centuries science has established a pretty robust technique for overturning consensus and examining the weirder areas of science. You have to publish. Waving an untestable vague idea of cause and effect around based on wordplay is something that is better left to politicians, con artists, and religionists. Waving his dick around like Rodney Hide did on Sunday merely proves that he doesn’t think with his brain.

The puppet party, the Mega party and the pro assault party

Politics for the year is shaping up to be very interesting.  In news today ACT puppet master Steven Joyce has failed to persuade Rodney Hide to stand again for Epsom, the Conservatives are aiming to legitimise the use of violence by parents against children and Kim Dotcom is said to be ready to announce his new political party this month.

Some extreme weather events around the world are being cited as proof by the ill informed that global warming has ceased.  Rodney Hide, Donald Trump and the commentators at Fox News rank amongst the most sceptical.  But when even Conservative Prime Minister David Cameron concedes that these weather events may be linked to climate change then the failure to make fundamental change becomes even more puzzling.

Remember the “underclass”? John Key pretended to be concerned about them for a while as a gimmick for the 2008 election. Thanks to Matt McCarten, Rodney Hide has been reminded of their existence. He then goes on to diagnose the wrong problems and the wrong solutions (of course). I’m sure that Standardistas can do better…

Last night, two ministers went head to head calling each other racists but it looked more like two old hobos fighting over a tin of beans. Pathetic, really. Meanwhile, Key has sided with Brash and dismissed the offense many Kiwis feel over the ads by saying he doesn’t “give a toss” about ACT’s racist ads.

Hiding the costs from Auckland

Hide is trying to distance himself from his negligent costing of the Auckland merger, and the consequent $450 million blowout on IT systems alone.  Aucklanders won’t have the satisfaction of kicking him out at the election.  But they can still kick out the arrogant government that steamrollered all over the city, with no regard for good process or public opinion.

Aucklanders to pay for Nats’ negligence

Auckland ratepayers are going to be stuck with a huge bill for the Nats’ failure to properly cost the merging of  the old Councils’ IT systems.  As Russell Brown puts it – “Someone has to be accountable for this”…

There’s a strange story in the Sunday Star-Times today. The premise is rumours that Don Brash has a love child but that seems to be baseless. The real point of the story is the Brash-ists trying to kill off Rodney Hide now, rather than wait until the election. I wouldn’t be surprised they’re behind the love-child story.

The semi-hysterical responses of some of the unreconstructed left and pseudo-left about some at the Standard supporting Hone Harawira and the Mana Party has really been quite revealing. They seem to think, with a clarity of logic Garth George would surely envy, that refusal to endorse a public burning of Harawira constitutes some kind of crazily misplaced […]

Don Brash was clear that he wanted Rodney Hide to lose his portfolios and leave parliament. Until yesterday. Now Hide will stay on as a lame duck minister with nothing to do for seven months. Will pocket an extra $35,000 salary for his trouble. I wonder what Hide secrets threatened Brash and Key with to get this taxpayer-funded golden handshake.

After a turbulent fortnight in politics, Helen Clark’s new look Green Party is now in place.

So, just as Irish predicted, Calvert was the swinging voter, and Brash has now achieved his hostile takeover of ACT.  Goodbye Rodney, and good riddance. What does this do to the political landscape?  Here are some preliminary thoughts.

Rodney Hide has resigned as Leader of the ACT Party.

While not actually a member of the Party, Don Brash will now lead ACT.

ACT’s newest MP Hilary Calvert is reported to have changed her support from Hide to Brash. That means the leadership of New Zealand’s most rightwing party will transfer to someone who isn’t currently even a member of the ACT Party.

What next for Rodney?

ACT Leader Rodney Hide will soon be out of a job. I doubt he’ll be in the running for any prime SOE chairs like Jim Bolger, and all the best jobs at the UN are taken by competent people. Jenny Shipley went in to the HR business and Mike Moore became a WTO lapdog.

So what next for Rodney?

Rodney Hide’s only chance of staying as the leader of ACT is to keep Hilary Calvert and John “Lamington” Boscawen on side. 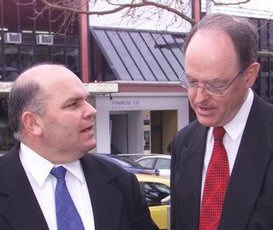 Recently Irish Bill wrote on the Nats’ dilemma in Epsom.  Looks the deal is now done, and predictably Key has decided that he needs ACT’s numbers (however small).

You almost have to admire Rodney Hide for his total contempt for political reality. He has managed to annoy aged GoldCard users with his comments on their off-peak free use of public transport. There’s also a horrible irony in Hide opposing publicly funded transport for people who aren’t him or his girlfriend.

NIWA vs the nutters

NIWA has had some of their data, methodology, and results checked by the aussies. As expected by anyone who knows something about the subject, they came back with substantially the same result. For the others like the nutters at the CSC and their political allies – well I can just see another conspiracy theory arising…

ACT, through Rodney (who’s so careful with the taxpayer’s money) and Jami-Lee Ross, are trying to make an issue with Len Brown’s spending.  I’m shocked…