Please replace Mike Hosking as the host for the upcoming election debates on August 31, September 14 and September 20. Hosking is well known for his aggressively right wing views in his segments as a political commentator. As such, Hosking cannot be trusted to present each candidate fairly in a moderated debate.
Section 4(1)(d) of the Broadcasting Act 1989 requires broadcasters to maintain standards consistent with the principle that when controversial issues of public importance are discussed, reasonable efforts are made, or reasonable opportunities are given, to present significant points of view either in the same programme or in other programmes within the period of current interest.

Why is this important?

It is vital that the nationally broadcasted election debates offer an unbiased opportunity for candidates representing their political parties to debate on policies. Mike Hosking’s socially irresponsible style of presenting has led to public campaigns for his removal, notably his comments on Andrew Judd in 2016. Hosking is an inappropriate choice to present the election debates in a fair, unbiased manner. 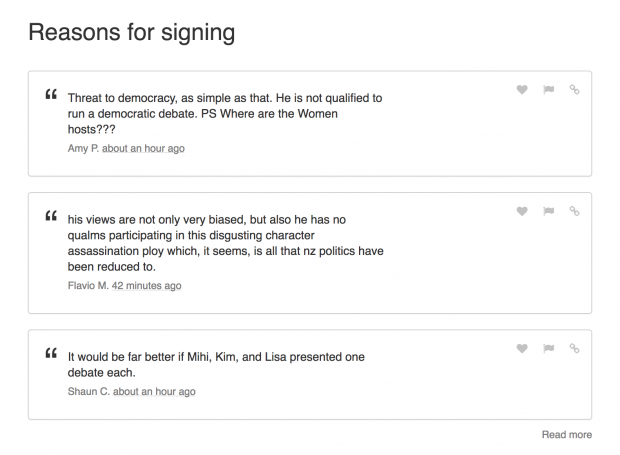