Pulling up the ladder behind her 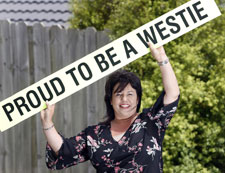 Paula Bennett’s image as a Westie solo mum who’s been on the DPB has been an important part of National’s centrist branding. By putting her in charge of the Ministry of Social Development, despite any relevant experience or discernable talent, National gave a clear signal that in their government image would trump substance.

Fair enough then that Labour are challenging that image in the house. Yesterday they questioned how Bennett’s Westie solo mum branding stacks up with her decision to cut eligibility for the training incentive allowance, which is worth up to $3862 a year for solo mums wanting to do university degrees or diplomas.

According to the Herald:

Ms Bennett responded that the country was living in “different times”.

“Listen up. It is called a recession, and we make decisions accordingly,” the minister said.

We’re hearing a lot of that lately to justify attacks on the poor. But it’s strange times indeed when you need take $2m a year from DPB mums trying to get ahead, but there’s $35m sitting around to subsidise private schools and a billion dollars to blow on tax cuts for higher income earners.

National’s always been about government for the rich, by the rich. And now Paula’s made it there she’s pulling up the ladder behind her.

115 comments on “Pulling up the ladder behind her ”