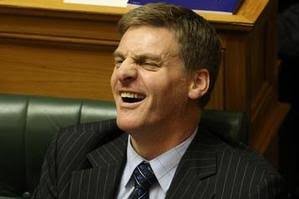 In this traditionally slow time of year any sort of news tends to make a splash.  Over the past few days we have had the ongoing saga of the Mad Butcher and the strange PR advisor who thought the best approach to minimise the damage caused by a very inappropriate comment was to make more inappropriate comments.  And Peter Dunne gained valuable media attention due to his prowess in tying bow ties.  I kid you knot.  Give that man a Ministerial Post and a free ride to a Parliamentary seat.

Yesterday there was another splash, this time about Bill English not attending Waitangi.

When he became Prime Minister I suspect a few lefties, myself included, thought back to 2002 and the abysmal, appalling campaign that was run that year and thought “yippee”.  Judging by the quality of of his recent performance I think we should revisit our optimism.  Because clearly the PR machine that was behind John Key is now behind Bill English.  Expect the PR advice to be much better than it was in 2002.

Fairfax broke the story and announced that English will not attend Waitangi Day celebrations.  There was a subsequent article by Jo Moir where she talked about a “Waitangi Day cringe“.  I suspect that this particular phrase came right out of National Party phrasing.

The Herald also used the “cringe” word and repeated the claim that English will not attend because he had been denied speaking rights.

So what actually happened?  Stuff helpfully put up the correspondence between the Prime Minister’s office and the organising committee and the documents themselves paint a rather different picture.  And before questions are asked about what other communications there were the letter from Ngatai Kawa Taituha specified that to avoid any confusion communications should occur directly with him as in previous years multiple communications had caused some confusion.

And was English banned from speaking?  The email from Taituha contains this paragraph:

Nope.  Does not look like a ban to me.  Looks like the organising committee wanted to have a formal powhiri and then offer English “a stage and forum for the Prime Minister to engage with Ngapuhi, address the Nation and talk politics freely and uninhibited, if he so wishes”.

But when you read English’s letter clearly he wanted to speak AT THE POWHIRI, not after.

But I think there is a compelling logic for what was proposed by the Committee.

A powhiri is the formal occasion where visitors are welcomed onto the Marae and following a formalized ceremony the welcome is complete.  Feel free to correct my very bland generalized description of a Powhiri.  I have attended a number and have always found them very moving and very traditional and after they have been concluded I have felt very welcome.

I have never felt the urge to get up and give a political speech at one.  It just seemed to be a very inappropriate thing to do.

I tried to think of a European equivalent.  If you are invited to a Catholic funeral do you think it appropriate to question why you have not been allowed to talk during the middle of the service? Or do you think it might be best to wait until after the formal part of the ceremony is finished and then give a speech at a time that the organizers offered to you?

And when Iwi travel to Parliament to celebrate treaty settlements whereby their legitimate claims are compensated by cents in the dollar they are expected to comply with Parliament’s rules.

English clearly thought differently, or thought that enough of the electorate would think differently for it to be worthwhile to dig his heels in and refuse to even discuss the timing of his speech.  But given past concerns with security the committee’s wish to handle things so that security threats are minimised is not an unusual stance to take.

But when you read the Committee’s letter English’s claim that he was prevented from speaking is, ahem, not correct.  The Marae Organising Committee was willing to provide an opportunity immediately after the Powhiri for him to talk about what he wanted.  He could have waited until the formalities were over.

What is really sad about this is that a group of Ngapuhi volunteers who are doing their best to organize one of the most important events in the political calendar have been held up to ridicule in talk back radio land for political purposes.

I spent part of the afternoon listening to talk back radio to assess the effects of the news.  Everyone had bought into the line that uppity Northern Maori were stopping English from talking.  And the framing had taken hold.

It is no wonder that we cannot have a proper discussion about the Treaty of Waitangi and its part in our country’s future.  Some parties are far too busy scoring political points.

I would suggest to Andrew Little that he should volunteer to take English’s vacant speaking slot and talk about New Zealand and what wonderful about it, what is going wrong and what needs to change.  See then if English’s refusal continues.

There has to be a better way.  Playing games with well intentioned volunteers for political points should not be something that any responsible Government does.  Ever.

Final words should go to mauī.  Hope the media reads them.

So because English can’t go all William Hobson and talk right through the pōwhiri he’s packing a sad. Fu.. maybe someone should say to him its not supposed to be a reenactment.

71 comments on “Refining that dog whistle ”