Remember Waihi 1912: who now has the courage? 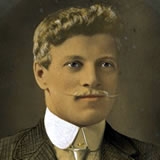 Tomorrow is the centenary of the death of Fred Evans on 13 November 1912, during the Waihi gold miners strike.  Out of this struggle of ordinary, but courageous NZ workers, grew the NZ Labour Party.  Who now has such courage to lead NZ politics in a new direction?

Historian Mark Derby says although the strike subsequently collapsed it was very significant as it led directly to the formation of the Labour Party.

Several of the figures active in the Waihi strike including Michael Joseph Savage, Bob Semple and Paddy Webb entered Parliament in the first Labour Government in 1935 and held office for a number of years.

As reported in the Bay of Plenty Times, the strike had begun in May 1912, and the government responded with very heavy handed and repressive police tactics.  The strike collapse and threatening police behaviour continued.

The Scarlet Runners, Messers Semple and Webb, running from police at Waihi

Only one other New Zealander died (at a later date) during industrial action.  An illustration of the time, available on the National Library Papers Past web pages, shows Semple running from police.

As reported in the Bay of Plenty Times, the strike had begun in May 1912, and the government responded with very heavy handed and repressive police tactics.  The strike collapse and threatening police behaviour continued.

From Te Ara Biography of Evans:

Early on Tuesday 12 November (‘Black Tuesday’), Evans went to the hall to relieve one of the pickets. Strike-breakers soon turned up in force, and marched on the miners’ hall with police in attendance. A scuffle saw two or three strikers retreat inside. There was a struggle at the door, and Thomas Johnston, a prominent strike-breaker, was shot in the knee. Police and strike-breakers burst into the hall. The unionists fled, with Evans the last one out. Constable Gerald Wade led the chase. He was shot in the stomach, but managed to fell Evans by a baton blow to the head, and Evans went down under a hail of boots and blows. Evans, almost unconscious, was dragged off to the cells, and left for an hour and a half before being transferred to hospital. Wade’s injury proved slight. Evans never regained consciousness, and died the next day, 13 November. …

The New Zealand Federation of Labour organised an enormous political funeral. Evans’s body was taken to Auckland, where thousands of mourners lined the streets. After a Methodist funeral service he was buried at Waikaraka cemetery on 17 November 1912. At the inquiry into Evans’s death, Wade was found to have acted ‘in the execution of his duty’ and to have been ‘fully justified in striking deceased down’. May Evans was destitute; the FOL raised £1,100 for her and the children.

The F. G. Evans Memorial Library in Auckland’s Trade Union Centre is named in honour of Frederick Evans. Each year a commemorative service is held at his grave.

As reported in The Colonist, on 13 November 1912, there was talk of a general strike, but that never eventuated.

Uke has provided some other important links and comments on the commemoration and history of this strike.  Remember Waihi; Labour History Project;

The Labour movement grew out of this bloody struggle.  Where is it today when the neoliberal scam is being exposed and the future, especially for ordinary and powerless people is so uncertain?

Who today has such courage to take stat a new political direction for ordinary, and often insecure, workers and other low income battlers?

Update: Allison McCulloch’s Werewolf article, Waihi’s story is history in the present tense …  teases out some of the different perspectives on the tensions and conflicts during the Waihi strike.  The official history portrays a clash between the Federation of Labour, and  a “company inspired breakaway union”, plus some state violence.  It underplays the role of the company.

At a Centenary seminar last weekend, there was this on the programe:

Chasing the Scarlet Runners – Women in Waihi
The women of Waihi played an active and innovative part in the 1912 strike, often stepping well beyond the accepted bounds of female behaviour for that period. Some, known by the admiring name of the ‘scarlet runners’, acted as covert couriers for the strikers, often at considerable personal risk. This paper examines the place of women in Waihi during the most tumultuous events in the town’s history.

Update 2: The only other person to die during a protest in NZ was Christine Clarke, she was run over while on a picket with port workers in Lyttleton, in December 1999. She was 45 years old with two children. [H/t Nick]