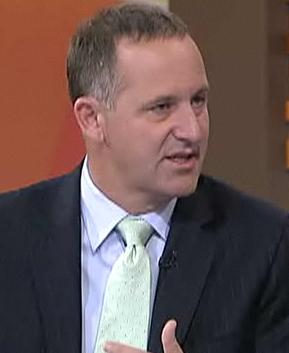 Breakfast host Paul Henry is in trouble again after making fun of a guest’s appearance.

“Shall I read these out? They’re a bit iffy,” he said, holding viewers’ comments. “Everyone in my ear is saying ‘don’t read it out’.”

Co-host Alison Mau tried unsuccessfully to dissuade Henry and bowed her head as he began to read the first letter.

“Have you noticed how the grey hair on the side of Key’s head comes and goes? Some days there’s none but today it was halfway up his head. If he’s going to dye he should be consistent about it,” Henry read out.

He continued in this vein for some time, adding his own comments.

“There’s definitely more grey by the day. It’s hard to tell which is moving faster: the grey or the receding hairline. The stress must be getting to him,” he said. “People can say what they see, it’s just television isn’t it?”

Rightwingers everywhere have stood beside Henry saying it was just a joke. One commenter on the Herald website wrote “message to Key: Don’t go grey or dye it when you do. Otherwise, expect to be laughed at”.