Is it OK for a woman with an opinion to host TVNZ’s Breakfast?

[getty src=”815156758″ width=”594″ height=”396″] It’s great news that Hayley Holt has landed a cool new gig hosting TVNZ’s Breakfast show. It’s not so great that before she even gets on the air we have to endure the pontification of some pundits about whether or not it’s “OK”, given she stood as a Green Party candidate […]

Paul Henry is to leave TV3. Did two pairs of tits lead to him getting the arse?

Some random musings on what happened in New Zealand’s media this year.

Yesterday a debate that has occurred on the Standard about how main stream media has a right wing bias became mainstream when Winston Peters accused Mike Hosking of being a National Party Stooge.  An online poll provided overwhelming support for his statement.  And recently Steven Joyce attacked Rod Oram because his analytical thoughtful analysis critical of the Government displayed evidence of left wing bias.

John Key made some outlandish claims about TPPA opponents this morning on the Paul Henry show.  And in response, as usual, he was not pulled up on his claims by his interviewer.

It looks like NZ’s last outlet for daily TV investigative journalism is going to be axed. TV3’s owners, Mediaworks, are going to focus all their resources into propping up the odious Paul Henry’s breakfast show. The bad taste jokes don’t end there, though. Campbell Live is going to be replaced with a comedy show. No, really. Updated with links to petitions.

Hosking, Henry, National and SkyCity – it’s all so cozy…

Is Cunliffe inauthentic? Does Key get to have his own facts? And when will we get proper (ie not game) analysis from our pundits? (spoiler warning: praise for Josie Pagani)

Yet another reason to move to Australia

Here’s an entry to add to the already very long list of why people move to Australia. Apparently, they have much better taste in media there.

Holmes and other toxic commentators

Why do we tolerate, indeed sometimes glorify, thoroughly toxic commentators and “media figures” in NZ? It’s a rhetorical question. The answer is, of course, that it’s all about the money…

Battle of the Henrys 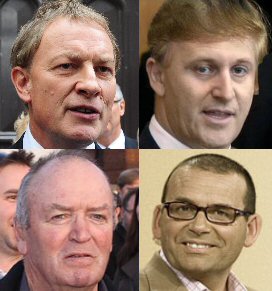 Clipshow – Paul Henry: we all pay for his unending bigotry

The Sprout led our coverage of the Paul Henry scandal, writing the first post after the prick’s attack on Anand Satyanand and the one on his resignation. The Sprout also first brought to public attention Henry’s racist attack on Sheila Dikshit, which became an international incident and caused Henry’s downfall. Here’s how it started.

If you resign from your job today will your boss give you half a year’s pay as a parting gift? No? Funny because that, apparently, is standard practice for high-paid stars. It is being reported Paul Henry received up to $150,000 from TVNZ when he resigned due to the storm over his racist remarks. And that was regarded as a good deal for TVNZ!

Are we going to get a Breakfast that looks like New Zealand?

Last time I saw Breakfast I saw it was overwhelmingly pakeha, middle-class, and blonde.

Just wondering, now that Henry’s gone, if we’re going to get a Breakfast that looks like real New Zealand.

Here’s John Key this morning on Breakfast, talking about Paul Henry’s resignation. Naturally he’s eager to downplay the influence of Kiwi-Indian business and diplomatic interests, and to deny any government involvement in the decision. The most revealing part of the interview is when Key stammers: “I have not spoke [sic] to Paul Henry” Key says […]

Despite a slew of scandals, Key has not enforced any ethical or professional standards on his ministers (apart from Worth, for whatever he did). Ministers know that Key will keep his personal brand clean but won’t do anything to pull them into line. This has created a culture of impunity in the government, which has started to spread wider.

TVNZ have announced the resignation of Paul Henry. John Key’s going to have a LOT of angry rednecks on his case over this one. First Andy Haden, now Paul Henry. And then of course there are all the civilized people already on Key’s back about his gutless failure to protest Henry’s racism in the first place.

New ‘no darkies’ party to form

Paul Henry’s jokes about women, deaf people and infant deaths, proudly brought to you by TVNZ

Here’s a compilation from TV7’s Russell Brown from April this year, highlighting the value for money taxpayers get from paying Breakfast Bigot Paul Henry $300,000+ per year: ridiculing the appearance of guests whose opinions he disagrees with, ridiculing deaf people, women, and the disproportionate rate of infant deaths in developing countries – “but they’ve got […]

The audience tell us over and over again that one of the things they love about Paul Henry is that he’s prepared to say the things we quietly think but are scared to say out loud. TVNZ, 4 Oct 2010

Due to widespread demand (ie BLiP), I’m going to try to find a Friday funny each week. This particular video is a pretty good spoof on Paul Henry. The only problem is that for comedic effect you’d normally need to go further than the origional. However going further than Henry requires more international incidents. TVNZ needs to fire him.

Paul Henry’s racism on state funded television has now reached the level of a full fledged diplomatic incident.  The New Zealand High Commission in India has issued a press release apologising and stating that Henry’s views do not represent “the New Zealand Government or people”.  Fine words, but they need to be followed up with appropriate action.  Henry has to go.

Yet more of Paul Henry’s racism, proudly brought to you by TVNZ

More anti-Indian racism from Paul Henry… and Paul Henry being racist about hispanics (you can tune out through the middle, but listen to the first and last few minutes) We’re paying this guy $300,000+ a year for this. This is what TVNZ condones in continuing to employ Henry, despite it going against TVNZ and BSA standards. It’s typcial […]

We’ve had a lot of coverage of the issue of TVNZ’s bigoted host but I want to chip in with a few points: Paul Henry’s ‘apology’ is in fact a calculated dog whistle to bigots, the blame for Henry goes to a deeper rot in TVNZ, and we have seen prove positive of John Key’s complete inability to lead and stand up for what’s right.