As a piece of political theatre it’s good and people who walk to work, including myself, enjoyed the unusual sight and gave them a wave (some people stuck in traffic didn’t find it so fun, though). But just remember, this was a set-up – truck companies did not waste a whole morning and all that fuel protesting that they didn’t get a chance to game the RUC increases by buying up credits ahead of time (the smart companies brought up credits in June anyway). The RUC increase is a minute part of truck companies’ costs. 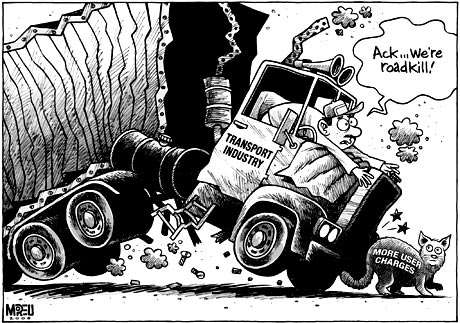 The Right needed a big show of ‘popular’ discontent with the Government and the Right has the problem that it’s not a mass movement so can’t get together decent sized marches. The truck companies were a good substitute, and the RUC increases just provided the excuse. If not for the RUC, they would have used fuel prices (which is what most people think it’s about anyway) or the regional fuel tax law or some other justification. The important thing was to have the protest.

[congrats to the people who put up some of the ‘let me on’ posters around Parliament, you’ve made the news (1) (2). Not bad for a cheeky idea conceived at 4:30 yesterday and posted at 5:00]

46 comments on “Reviewing the ‘truck strike’ ”