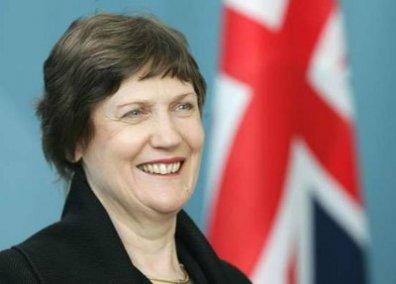 When John Key was elected he was wise enough to be magnanimous in victory, acknowledging Helen Clark’s considerable skill and integrity throughout her term as one of our longest serving Prime Ministers.

Since that time however, Key’s underlings have begun another death by a thousands cuts campaign – this time on the public’s memory and perception of Clark’s time in office. They know Clark is just too popular and too highly respected by too many people to just come out with an overt slime campaign, so instead they manufacture mealy-mouthed oblique back-handers that do their best to sound balanced and reasonable without sounding like it’s just outright sour grapes.

Like Farrar’s “I have generally regarded Clark as an able political administrator – as have most of the public…. But I do have some concerns. To me the pre 2005 Helen Clark is different to the post 2005 Clark. I’m not sure what happened, but somewhere along the way Helen seemed to lose her previously reliable judgement.” Or Roughan’s “Clark good but not great”, a tragic Herald attempt to devalue Clark winning the Herald’s “Greatest Living New Zealander” poll. Or National’s backtracking about how Labour had managed the economy competently, but somehow accruing surpluses during times of prosperity in preparation for leaner times ahead was “irresponsible”. There are many more examples, but for a quick reference just skim through the lines being attempted by our resident trolls.

With 1000 Cuts campaigns it’s not about one king PR hit – each cut in itself seems fairly innocuous – it’s about sowing seeds of doubt then repeating the memes often enough that audiences start to assume they are true. They erode their targets slowly but inexorably.

So why can’t the right just leave Clark’s legacy be? Well, because they can’t afford to.

They know that in 30-odd months or so, the New Zealand public will be looking back wistfully at the Clark administration as a better time, with a PM that could always be trusted to be on top of her game, and trusted to lead with prudence and certainty – whether you liked her or not. In 2011 National can’t afford to be running against a party that gave New Zealand its greatest PM in living memory, especially when we’ll all have suffered a lot more economic hardship by then. For all his talents, Key’s dithering and inexperience against a backdrop of increasing social and economic turmoil won’t compare well to a nostalgic memory of Clark and Labour.

So for the right those memories really need to be poisoned before they take root. Expect a lot more revisionist histories from the right in the coming months and years.