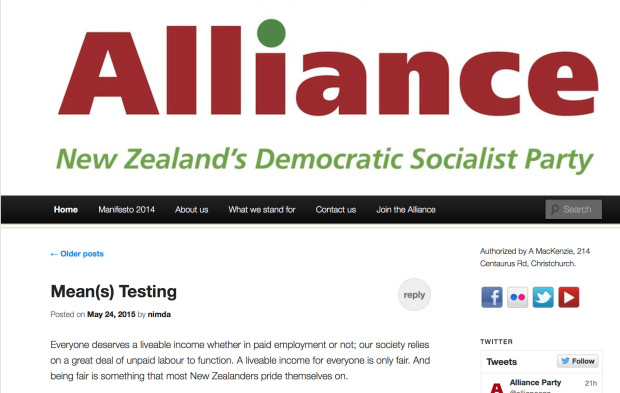 An apt description by NRT:

The Alliance (1991 – 2015). Born of Rogernomics, Ruthanasia, and everyone who was unhappy with them, it gained 18% of the vote in the 1993 election, but (thanks to FPP) only two MPs. After that it was all downhill, as their supporters either gave up voting due to being unable to produce change, while Labour moved away from NeoLiberalism and regained some respectability. MMP finally saw them gain proper representation, and they entered government in 1999 in coalition with Labour, but disintegrated under the pressure of Labour’s backing for America’s war in Afghanistan (and how’s that gone, guys). Died after a decade-long case of irrelevance 26 May 2015. Survived by the Greens.

The Alliance gave us paid parental leave, and helped drive Labour back to the left. But after 2005, when they got just 1,641 votes, it was apparent that they were done. What’s surprising is that it has taken them so long to admit that.

Some of my best friends used to be members of Alliance.  The relationship with Mana was complex …

To all former members kia kaha and keep up the battle.

UPDATE: The Alliance clarifies the situation, saying that the de-registration will be hopefully just temporary:  https://www.facebook.com/alliance.party  Thanks Kiwiri for pointing this out.

50 comments on “RIP the Alliance Party ”