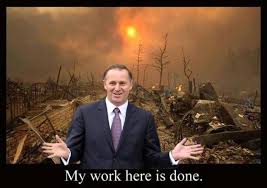 In 2013 National released proposals for reform of the Resource Management Act.  I blogged about the changes here.  The announcement by Minister Amy Adams is here but for some freaking reason the document appears to have disappeared from MFE’s website although there is this Web Archive download of the page.

The reforms followed the usual modus operandi of the Government.  Use anecdotal evidence to justify sweeping changes.  Announce a whole lot of different areas of reform.  Move quickly and trust that confusion will set in.

At the time I said this:

National is utterly predictable.  Bash beneficiaries, weaken employee protection, attack the trade unions, and trash the environment represents for it business as usual.

Yesterday it announced its proposal for further changes to the Resource Management Act.  Most of the changes are technical and it will be difficult to get ordinary Kiwis upset with what is proposed.  But the changes are at best misguided and will do nothing to maintain existing environmental protection.

When you read the press release the proposes do not appear so bad.  The one plan idea is something that Auckland is doing already.  And who can disagree with increased accountability?

The headline grabbing proposal will be increasing the supply of useable land so that there is a decade’s worth available for projected growth.  National sees a political imperative in appearing to be doing something about housing affordability.

The Minister will be given greater power to intervene.  The party that championed [attacks on] Nanny State is more than happy to give itself increased power as long as it is the party in control.

Sections 6 and 7 of the RMA are to be consolidated into one section.  This is a retrograde step.  Section 6 currently states that the protection of various environmental features are matters of national significance.  Section 7 sets out other things that need to be considered.  Consolidating them will weaken the protective imperatives in the Act.

The proposed new wording for the section has a number of damaging changes.  The new section would remove the need to protect outstanding natural features and landscapes unless they are specifically identified.  The protection of historic heritage from inappropriate subdivision and development is watered down.  The ethic of stewardship for the environment is removed.  The maintenance and enhancement of amenity values will no longer be a consideration.  And the maintenance and enhancement of the quality of the environment disappears as a principle.

A new principle is added.  If passed the effective functioning of the built environment, including the availability of land to support changes in population and urban development demand, will be a major consideration when making decisions under the RMA.

When you compare the existing wording of sections 6 and 7 to what is proposed you can see that it is intended that the environmental protection provided by the RMA will be weakened.

Both Labour and the Greens opposed the proposals.  Maryan Street said at the time:

By saying that these reforms will open up land for affordable housing is the most deceitful part of John Key’s approach. The government has lots of levers it should have pulled over the last five years to address our critical affordable housing shortage. Now when the noise around it has become too loud for the National Party to ignore any longer, they try to pretend that the RMA has been the problem.

The real danger is that the RMA is being turned into an Economic Development Act and environmental protections are being sacrificed in the process.

And the Greens Eugene Sage said this:

The changes to the Act’s purpose and principles are based on ideology rather than any evidence or substantive analysis of the need for change.  As the Ministry for the Environment’s on the Minister’s February 2013 discussion document says, “ Submitters were concerned there was an absence of reliable evidence – beyond anecdotes and case studies- on which statements were made. Such concerns were evident irrespective of the submitters’ position regarding the intent of the Discussion Document.”

The bill stalled.  Peter Dunne grew a spine and along with the Maori Party told John Key they would not support the bill.  National and in particular Amy Adams had a great deal of egg on their faces.  National then said that they would review the proposals after the election.

Nick Smith is to announce proposed changes to the RMA tomorrow and to release a treasury paper on the issue.  As Ad noted this is frankly weird.  Surely the Ministry for the Environment, not Treasury, should be the department to announce changes.  I agree we have reason to be very afraid.

Presumably the previous proposed changes will again be announced.  Smith has said that the reforms will also address what changes to strategic housing area laws will be made as the SHA provisions are subject to a sunset clause.  I anticipate that major features of the changes will be the head on attack of any concept of a compact city, the further removal of rights of individuals and communities to have a say in proposed developments and further measures to make the RMA developer friendly.

The Act is meant to be there to provide some environmental protection.  Environmental standards are getting worse, not better.  I think we have reason to be very afraid with what National is intending.

lprent: As anticipated National is pressing ahead with the same failed plan from last time

Smith signalled that National was reviewing the most contentious of its proposed reforms of the RMA, covering changes to the act’s principles – a move critics have argued would aid development – but otherwise the tone of today’s speech was consistent with the last term.

In other words a figleaf to allow the “blue-greens” to hide their wee genitals behind.

The National Government must stop using the Resource Management Act as the straw man for its own failure to build more homes and put an end to the country’s housing crisis, the Green Party says.

Indeed. Despite the blustering bankrupt at Whaleoil whining from the cheap seats that Auckland City Council has been dragging its feet on the Special Housing Areas, the reality is that the legislation was as unnecessary as the these RMA ‘reforms’ are.

The reality is that even if the price of fuel drops to half of what it is now, the jobs aren’t out in the rural countryside that Nick Smiths mates have land-banked. There isn’t enough fast efficient public transport to get residents to jobs.

So the only houses that will be going out that far are supersized MacMansions that will have no effect on house prices driven by the lower end of the market. And developers aren’t building affordable homes. RMA changes make absolutely no difference to that equation.

Basically this government is in the process of dismantling the only long-term solution for affordable homes. The purchasing power of the State Houses.

Stupid fools in National are doing the ideological stupidity again – just as they foisted leaky building on us..