Robbie would be turning in his grave 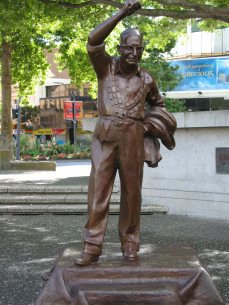 Simon Bridges is an idiot.  He thinks that Auckland’s congestion can be solved by focussing less on the CBD and large rail projects and more on local roading projects in the outer suburbs of the city and bus infrastructure.  Of course this will solve congestion problems which occur predominately on the motorways going into the city centre.  Improved local roads will allow motorists to get to the congested areas quicker.

Ad in general comments describes the system and the implications of National’s proposals well.  Basically we already have a system where local and central Government negotiates funding for transport projects.  It is set up under the Land Transport Management Act and is designed to remove political interference from decisions concerning transport funding.  Projects are assessed according to benefit cost ratios, strategic considerations and anticipated growth patterns.  Bridges wants to rip this system up.

Here are Ad’s comments in full.

“Mayor Brown’s decision to accede to government pressure and sign some transport accord similar to the Housing Accord is dangerous.

Auckland Council – together with every other council in the country – has just gone through a statutory process over the last three months to mandate a transport programme, and put their bids up to the National Land Transport Plan. It was the largest local public consultation ever done in New Zealand. This nationwide plan will be announced on June 30th. The evaluation of priorities is set and agreed between every council and the New Zealand Transport Agency. The law detailing this massive process – the Land Transport Management Act – was only revised last year.

Central government cannot override the process that it has just asked every other elected body in the country to undergo, because all bids are in, all Council rates are set, all roading and public transport contracts are ready to go for the new financial year.

Nor can any Minister change this process without changing the law.

If central government wants to change Auckland’s transport priorities, it should have done so as the plans were being formed. In case we forget, Auckland Transport is one of the largest commercial entities in the country, commanding about $14 billion worth of assets, running a system using about 40% of the country’s transport budget and about 60% of Council’s budget. Not even the Prime Minister can hold up his hand and command this supertanker to stop.

Mayor Brown could also remind the government that if they don’t like heavy rail investments, they should do the decent thing and subject their motorway projects – at a fair discount rate – to the same scrutiny and be prepared to reallocate that funding if it serves Auckland’s growth needs.

I hope this is depoliticized quickly by getting officials to agree the evaluative criteria on such things as:

We should not have got to this point, but since we have, we should negotiate hard.”

46 comments on “Robbie would be turning in his grave ”