The tactics used by Rodney Hide to ram through the Auckland SuperCity legislation without reference to a select committee or referendum should not surprise anyone.

Rodney’s just a puppet – the master is the man who sits behind him in Parliament and beside him in the ACT caucus – the Honourable Sir Roger Douglas.

Douglas spelled out the tactics in late 1989, in a speech entitled “The politics of successful structural reform“. It was given in Queenstown to the Mont Pelerin society, formed to celebrate the legacy of the right-wing economist Hayek.

The whole article should be required reading for anyone with an interest in New Zealand politics. Here’s a taste, some of his ten principles for successful structural reform:

“Implement reform in quantum leaps, using large packages. Do not try to advance one step at a time. Define your objectives clearly and move towards them by quantum leaps. Otherwise the interest groups will have time to mobilise and drag you down.”

“Speed is essential – it is impossible to go too fast.”

“Once you start the momentum, never let it stop rolling.”

Buried inside this one: “the fiscal gains from corporatisation or privatisation will vanish without trace if expenditure in an unreformed social services sector is left to rise without regard for efficiency”

The speech was given at the end of 1989 – Douglas had been sacked as Finance Minister, reinstated to Cabinet as Police Minister whereupon Lange resigned, the sale of infrastructure assets to Fay and Richwhite et al was well under way, and Labour was headed for landslide defeat in 1990. Roger was on the way out. 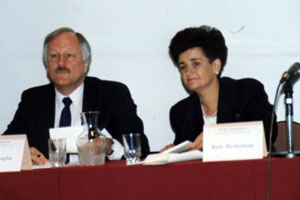 But then there was Ruth Richardson. Ruth was there with Roger at his speech. You can find this photo of them at the Mont Pelerin meeting on his website. She was the next one to apply Roger’s political lessons in the “mother of all Budgets”, until she too was sacked by Jim Bolger after National’s close shave in the 1993 election.

Now it’s Rodney’s turn – ram it through before anyone gets a chance to object.

Why? For exactly the same reason as Roger and Ruth. The last set of significant publicly-owned New Zealand assets available for privatisation are with local government – roads, water and waste.

But ACT could not do this without National. Roger’s is the true face, Rodney’s the puppet, and John Key is the false front – the cabinet veneer if you like.

We are now seeing the real agenda of another right-wing National Party government.

Key’s promise before the 2008 election not to privatise anything in the first term of government can now be seen for what it always was – a dog whistle to the Auckland financial elites that assets would be got ready to be put on the block in the second term.

That is the real reason for the urgency, lack of consultation and over-riding Local Government Act requirement for a referendum so the people of Auckland get a say – there is no other.