John Key’s impatience to get the election over and done with makes a lot more sense in light of today’s Roy Morgan poll. The poll has Labour up 4 to 38%, the Greens up to 8% and National down 3.5 to 44.5% – well out of their comfort zone given their lack of viable coalition partners. 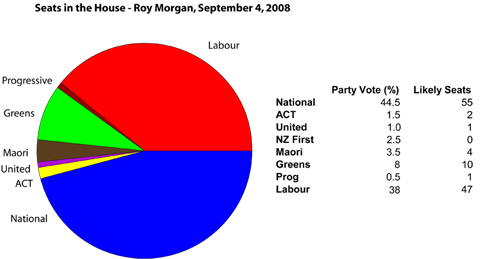 On these numbers it’s the Left by a nose, with a likely Labour/Prog/Green/Maori bloc winning 62 out of 120 seats. More importantly, the trend is all in the Left’s favour: It appears the secret tapes scandal is starting to have an effect, with recent polls showing strong public distrust of National’s policy agenda. Recent policy releases like the privatisation of ACC, the 90 day fire at will policy and toll roads will only help cement those perceptions.

If I were a Nat I’d be hoping like hell the bigwigs had some sort of killer billboard campaign lined up. Oh, erm, that’s right…