Shoreline ecology, public infrastructure, residential and commercial assets, community values and the future use of coastal-marine resources will be severely affected by changes to coasts due to sea level rise, and storm surge, and secondary effects such as erosion and flooding.

Damaging flood events will occur more often and will affect rural and urban areas differently. At and near the coast, floods will interact with rising sea levels and storm surges. Increasing frequency and severity of high intensity rainfall events will increase these risks.

Freshwater resources: New Zealanders rely on the availability of freshwater

Increased pressure on water resources is almost certain in future. Decreasing annual average rainfall in eastern and northern regions of both main islands, plus higher temperatures, are projected to increase the frequency and intensity of droughts and the risk of wild fire. At the same time, urban expansion and increased demand for water from agriculture will result in increased competition for freshwater resources.

The Ocean: New Zealand is surrounded by sea

Changes in ocean temperature, chemistry, and currents due to climate change will have impacts on New Zealand’s marine life, fishing, aquaculture and recreation use.

Over half of New Zealand’s more than 50,000 species are found nowhere else in the world; over three quarters of the vascular plants, raising to 93% for alpine plants, and over 80% for the more than 20,000 invertebrates. Existing environmental stresses will interact with, and in many cases be exacerbated by, shifts in mean climatic conditions and associated change in the frequency or intensity of extreme events, especially fire, drought, and floods.

The ways in which other countries are affected by and will respond to climate change, plus commitments New Zealand makes to international climate treaties, will influence New Zealand’s international trade relationships, migration patterns and specific domestic responses.

Today the second shoe dropped with a new report – Transition to a Low-Carbon Economy for New Zealand, see also the media release:

The report identifies opportunities in the sectors of:

It also considers the interactions between technology, policy and behaviour and considers factors that either limit or provide opportunities for change, and gaps in our knowledge.

The report outlines important context on each area, but in brief the opportunities to reduce emissions include:

There is a clear case for immediate action. New research and technologies will continue to emerge but many mitigation options are already well-understood and achievable. Delaying actions would result in a greater amount of emissions overall, given that CO2 emissions accumulate in the atmosphere for hundreds to thousands of years.

This is great work from the Royal Society. When Paula Bennett is back from signing the Paris Agreement I hope she is planning to read both reports from cover to cover. THEN ACT ON THEM. Sorry for shouting.

The Herald coverage of the report put together this useful infographic: 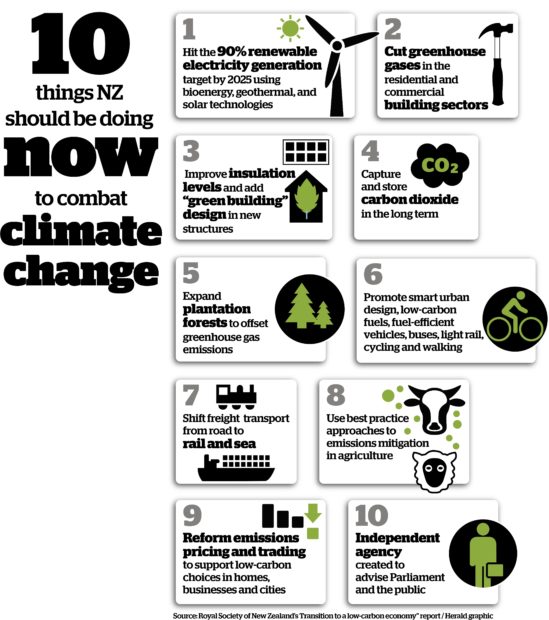 30 comments on “RSNZ report – Transition to a low-carbon economy ”