Scientists remind dickheads of their inadequecies

Ever imagine what a bull elephant’s penis looks like? Well wonder no more. Biologists kicked off a #junkoff today with this challenge. I’m afraid that most of the ‘junk’ here is male – because that gender tends to be the showoffs?

Man, how long is that damn thing! Makes a horse look a bit pathetic

Wouldn't want equines to be left out here: apparently this grullo hides his pattern on his #JunkOff pic.twitter.com/M9n1l4pxGn

Or a kangaroo bungee..

Hanging your balls off a bungee cord while repeatedly leaping meters in the air. Adaptive?#junkoff pic.twitter.com/d9NDId5JJd

Or snakes do it double…

Or what we can see from bones.

No fossils for #junkoff ? So here is my paleo entry, note the extra bone between the legs of the fossil Europolemur? pic.twitter.com/FiCXaMX43d

Sharks do it with hooks

#Chimaera #junk comes in all shapes and sizes, includes hooks and is also found on top of their head #junkoff #sharks pic.twitter.com/AdRqeaVgXQ

After dealing with so many trolls on this site over the last 8 years waving their dicks about, I’d have to say that the other animals make them look poorly endowed and rather uninventive. 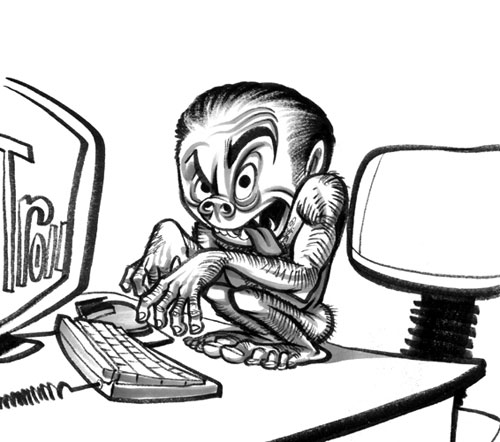 12 comments on “Scientists remind dickheads of their inadequecies ”