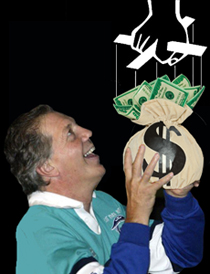 Remember how I asked who was funding Tim Shadbolt’s campaign to “bring down the government”? Turns out the Southland Times was interested too and they’ve found out his move to deliberately break electoral law is being propped up by the Talley brothers, who appear to have a bit of a history of that themselves.

Now the Talleys have a fine tradition of backing National (including offering Don Brash a million dollars and South Island use of a private helicopter for the 2005 election campaign) and are well known right-wing political activists. Most recently the Talleys have been behind a campaign to take the ACC to court – it turns out they got a cut-price ACC deal in exchange for covering all injury costs themselves. One of their workers got shot at their Wairoa plant and now they think the taxpayer should foot the bill – National has championed the company’s attempt to escape their contractual obligation.

It’s also interesting to note that Peter Talley was the guest speaker at National’s Canterbury Westland regional conference in 2004 and that they have a reputation as aggressive and anti-worker employers. After losing a case of sexual discrimination against one of their female workers Andrew Talley’s response was:

There are jobs – pole dancing being one and fish filleting being another – that have a higher predominance of either men or women. The decision is a joke.

So let’s have a look at this: we’ve got a bunch of extremely wealthy right-wing businessmen who think they are above contract law and have a very close relationship with the National Party and they’re funding an “independent” campaign by Tim Shadbolt to bring the government down. That stinks more than a Talley’s fish factory and when a veteran politician like Shadbolt claims he had no idea the Talleys were in the Hollow Men (note: he didn’t say he had no idea they were National Party activists) then he’s being more than a little bit slippery.

Tim mate – you should have learned by now that when you lie down with dogs you catch fleas.