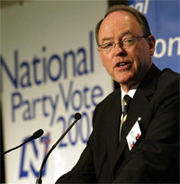 Well the productivity task force is reporting back today and some of their ideas have been forward released.

As we expected they are a grab-bag of unpalatable, short-sighted and frankly mad measures from the loony right including putting interest back on student loans, flat tax and means testing free childcare. As the official announcement comes I expect we’ll also see the stripping of work rights on the list as well.

What was completely unexpected for me was the plan to cash up the super scheme. Between that and destroying the tax base I can’t see how we could afford to pay any superannuation at all. But then again maybe the plan is to increase productivity by forcing the elderly to work or starve. Ironically that would probably increase productivity by lowering wage inputs. Which just goes to show what a slippery notion productivity is.

Of course Key won’t run on much of this at all and any measure his government does implement will be watered down considerably.

But that’s the point. This carefully picked task force was never about increasing productivity but about pushing previously discredited and politically poisonous fringe ideas back into the discourse and allowing the government to pitch slightly less poisonous right wing ideas as moderate and centrist by comparison. They’ll also want to test to see which of the crazy measures garners the least outrage.

So while the media are screaming about flat-tax and scrapping the Cullen fund it might pay to look to the fine-print. There will be plenty of nasty stuff that creeps under the radar that may well end up as legislation.

51 comments on “Shifting the centre ”