John Key says there is to be no new money in the Budget. The health, education, and other locked-in increases  plus the Christchurch rebuild will come from cuts elsewhere. Cuts of up to 32%. It doesn’t have to be that way. The rebuild and the shortfall from the failing economy can be easily covered if Key wanted to. If he chooses to slash and burn, it’s because he wants to.

Then, I looked at the things that can’t be cut:

So, what’s left after all that locked in spending? And how does that compare to what the other areas of government spending need just to tread water? Yeah, it doesn’t. We’re talking $3.75 billion in real cuts (only a billion of which is due to the quake rebuilding). That means nearly 19% slashed from housing, transport, police, defence, customs, conservation, justice etc etc.

I did the same thing but assuming the Nats won’t cut transport, and then again this time assuming they also won’t cut police and defence either. 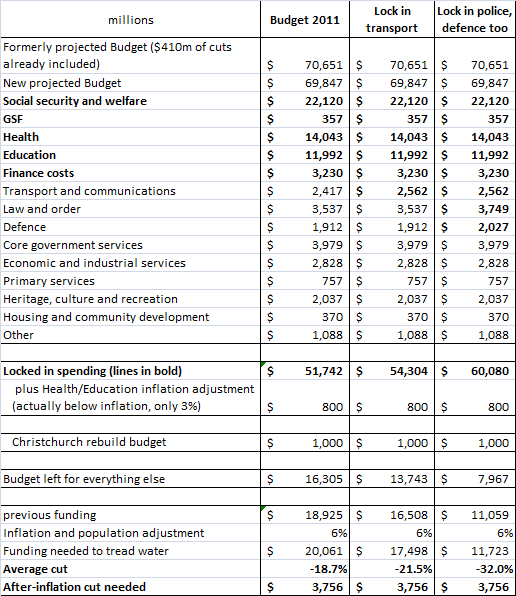 The cuts for what is left are, of course, even deeper, up to 32% in real terms. Are you happy to cut 32% from the Kiwisaver,  and bio-security budgets? No. Well the money has to come from somewhere else then. What about 32% out of state housing? Or 32% out of R&D? Each area you wouldn’t cut means deeper cuts somewhere else.

The point I’m making is that this isn’t play money. The $3.75 billion in real cuts that Key is planning to make has to come out of the public services that you and I use, directly or indirectly. There’s a reason they call it the social wage – without it we’re poorer and we have to pay money out of our other income to try to cover the costs.

And what’s sucking all this money out of the economy and firing all those workers going to do to the wider economy?

What would I do? Well, the Budget shows that tax swindle from last year is costing $1 billion over four years, despite Key claiming again yesterday that it was fiscally neutral. So, reverse the tax cuts for the rich by moving the 33% rate back to 39% and keeping the corporate rate at 30%, not cutting it to 28% on April 1 as planned (oh, yeah, despite this ‘crisis’ the corporate rate is still being cut this year). That’s $1.4 billion right there. Then, get rid of those ETS subsidies, that’s another billion this year. Lets suspend new state highway construction, apart from the projects that are already underway. Well done, we’ve covered the shortfall, except for the earthquake costs.

Now, lets add that temporary earthquake levy that the vast majority of people support, $6 a week for each taxpayer is a billion a year.  That could be a flat levy on everyone or it could be progressively, whatever floats your boat.

Simply by reversing the tax cuts for the rich, taking away subsidies for polluters, stopping waiting money on white elephant highways, and putting on a widely-supported temporary levy there’s no need for any cuts.

If Key refuses to take these options and, instead, slashes public services it’s because he wants to cut them, not because he has to.