To paraphrase Michael Hudson, debts which cannot be repaid will not be repaid. The only question is, figuring out how not to repay those debts.

The humane political economic activity before Europe now is in structuring new financial arrangements which will allow the ordinary people of Greece to start working, living, and producing again. But will the Eurogroup and their financial masters instead choose to push for another series of failed austerity programmes, while preaching their own false, financialised moral order (‘lazy Greeks need to repay their debts according to the rules – either with a pound of flesh or even with their mortal lives if necessary’). Such arguments have provided the financial powers in Europe with a necessary veneer of popular justification for their years of Greek fiscal waterboarding. Debt, as it has always been throughout history, remains an effective tool of social and economic control by the powerful against the weak.

From the standpoint of Economics 101, the ongoing IMF/Germany/Eurogroup/ECB insistence on forcing Greece into futile decades of austerity is illogical. Austerity has already proven highly damaging to both the Greek people and the Greek economy. Apart from dangerously humiliating the entire Greek nation (and energising the neo-Nazi “Golden Dawn” party), chronic austerity is a predictable recipe for aggregate demand destruction, the resulting economic malaise all but guaranteeing that Greek debts to the rest of the EU cannot ever be repaid.

In contrast, a common-sense restructuring of Greek debt which prioritises investment growth and productive capital expenditure would allow Greece to repay, over time, all its obligations to creditors.

It is worth remembering that the “German economic miracle” after World War 2 was founded on multiple rounds of writing off huge German war debts. In 1945 these debts were many multiples of German GDP. Germany should not now be kicking out the ladder, after having climbed to the economic top of Europe via the receipt of its own massive and generous debt restructuring.

This overall picture might lead one to the conclusion that the European push against Greece is predominantly ideological and political in nature, no matter how strenuously European officials cite rules and precedence as the decisive factors. 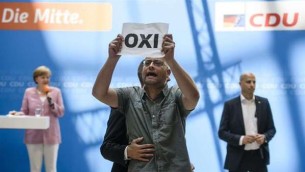 On the back of the loud Greek “OXI” referendum result, it’s Europe who must get real and take heed of the recently (and quite curiously) released IMF ‘preliminary debt sustainability assessment‘ report that suggests that slashing Greek debt and instituting a 20 year repayment holiday is the way to get the Greek economy back on its own two feet.

Getting Greece back on its own two feet is surely what the EU powers and their financial masters want. Right?

Best wishes to the tight knit professional Syriza team who have fought the good fight, thus far. Unfortunately, the push back they will suffer isn’t over yet, as the daily threat of out of service ATMs, bare supermarket shelves, missed pension payments and empty pharmacies is an ever present reminder to all Greeks that they are still not in charge of their own country: the economic hitmen are. To recap – debt remains a potent means of social and economic control, even over entire sovereign nations. And those in power who have that control rarely give it up easily or willingly. 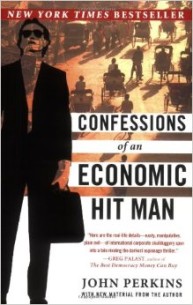 Historical note for Matthew Hooton: who glibly remarked that “Syriza will be forced to take Greece down a totalitarian path. It’s what always happens when countries follow this type of economic “thinking”.” In fact, the last time Greece went down “a totalitarian path” was when the USA helped install a CIA backed military junta in Greece, 1967-1974. That’s partly why Greeks are fanatical about their democratic rights today.