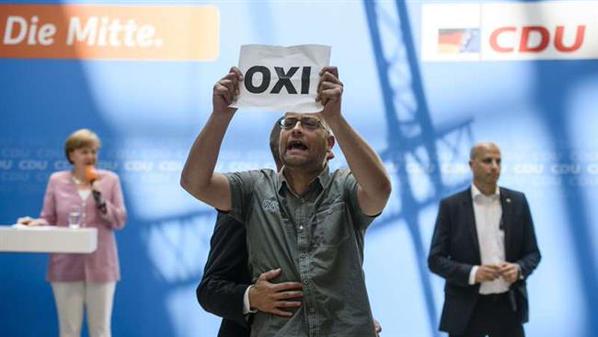 By the time you read this the Greeks will have voted in a referendum on whether or not they should accept austerity.  The stakes are high.  Next week either they resign themselves to continuous austerity imposed hardship or they move into unchartered waters and give the bankers the middle finger.

Opinion polls suggest the result will be close.  Those with nothing to lose, the young and the poor will vote no, the middle and upper class will tend to vote yes.

Economists are split on what should happen.  Progressive economists such as Joseph Stiglitz, Paul Krugman, Thomas Piketty, and Jeffrey Sachs would vote no essentially because this is the only option if Greece is to have a future.  Others including 246 professors at economics schools and universities in Greece  have urged a yes vote, obviously because of their views on economic orthodoxy.

And the EU may have blinked and may have acknowledged that Greece should be allowed to break out of the straight jacket the EU has put it into.  From the Guardian:

After more than five months of eyeball-to-eyeball confrontation between Alexis Tsipras’s radical left-led government and Greece’s creditors, and with only hours to go before voting began, one of the most hawkish of the lenders appeared to blink. Germany’s finance minister, Wolfgang Schäuble, until now even more of a hardliner than his chancellor Angela Merkel, suddenly turned a more conciliatory face towards Athens.

Having previously insisted that a No vote on the lenders’ last terms would see their country forced out of the euro, Schäuble told the Bild newspaper that the choice before them on Sunday was between holding on to the euro and being “temporarily without it”.

It was far from clear what Schäuble had in mind, but economists have mooted the notion of a period in which Greece might go back to its national currency, the drachma, while its economy recovered.

Polls close at 4 am New Zealand time and results should start to come through from 6 am.

302 comments on “The Greek referendum ”