Slater v Craig – battle of the has beens 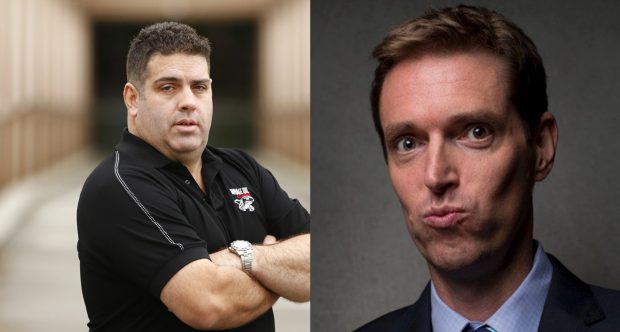 So Cameron Slater and Colin Craig are in court.  Seeking damages from each other.

Right wingers have this thing about how state resources should be used only for essential purposes.  I agree.  Tying up weeks of the High Court’s time with a case that in my personal opinion involves the contest of bruised egos, one rich and one not so, seems to me to be something that should be sorted out by alternative means.  Tiddlewinks anyone?

I have practised law for the past 32 years.  Courts  are places where people go to die.

I recommend going there only if you have nothing to lose or if it is your job or you just want to watch.  If you have something to lose I suggest you avoid it at all costs.  If at all possible.

A quite recent court appearance I was engaged in involved the application by Cameron Slater for name suppression after he was charged with attempting to procure a hack on the Standard.

I was astounded at the treatment that Slater received from the authorities in that case.  He obtained name suppression immediately because of a proactive application from the Crown and during the case the police did not attempt to ascertain the views of the trustees of the Standard before determining its position.  I cannot understand how this happened.  When there is a change of Government I hope the next Minister of Justice will ask why.

Jessica Williams summed up that case in these terms:

It’s like 10,000 Whales when all you need is a knife. However Alanis would have styled it, today is a day for irony.

For today is the day when we can finally report that Cameron Slater, arch defender of open justice, has failed in his attempt to get permanent name suppression, after accepting diversion for charges that he tried to get a small-time hacker to pry open a left-wing website.

And now we have this case involving Cameron Slater, the self designated protector of our right to know what is happening verses Colin Craig, the former leader of a party that thinks that we are all too involved in licentious behaviour and should revert to more conservative styles of living.  Craig is facing allegations that his relationship with a former staffer may not have been the sort that the bible approves of.

As for Craig well he did pump huge amounts of money into a small political party.  And he could have been a major player in Parliament.  If the Conservatives had cracked the 5% barrier they could have been the difference between success and failure for pretty well every contested vote that has occurred this term.  Our laws could have become far more conservative if Craig had succeeded.

If I was making this investment I would be upset.  The return should have been greater.

Craig is also the writer of love poems.  Like this one:

You are beautiful because your eyes are lovely

You are beautiful because your lips are so amazing to kiss

You are beautiful because you are fearfully and wonderfully made

You are beautiful because your skin is so soft

You are beautiful because you have the most perfect …

Please know you are beautiful

In a rather strange twist and despite his wealth Craig is self represented (although apparently with the help of Thomas Cleary as a McKenzie friend [corrected thank you Andrew Geddis]) and Slater is paying presumably huge amounts to have Brian Henry represent him.  Henry is a very good lawyer, but he has done a lot of work in the past for Winston Peters.  What is going on?

And why is Craig using a McKenzie friend?  Does he prefer his personal judgment to the judgment of lawyers who day in and day out engage in litigation?

No doubt Rachel McGregor will again have to give evidence.  She has, it appears, been the subject of unwanted attention from Craig, and had private information concerning her published by Jordan Williams and by Slater.

Hey guys, all who claim to be supportive of her, don’t you think it is time to let this go?

Steve Braunius has been giving the case the sort of attention only he can.  Read his posts and laugh.  Some have criticised him for continuing McGregor’s torment but I think the reporting has to occur.  The dying embers of the Conservative Party and of Dirty Politics need to have their end publicised and the history dissected so the chance of a repeat is diminished.

Radio NZ also has been reporting on the case.  Including this gem:

The cross-examination began with Mr Slater explaining why his blog was the most popular while left-wing blogs were run by a bunch of “moaning Labour Party supporters”.

“You have to provide relevant, funny, pertinent information for readers otherwise they don’t come. It’s the ultimate market forces in action. They come because they like what they see. That’s why they buy merchandise, that’s why they back me. That’s why everyday in court I’ve had a legion of supporters watching.”

Mr Craig, who is representing himself in court, then asked Mr Slater about politics.

Donald Trump thinks the same.  The best civilisation is one where there are no rules and the biggest, most obnoxious and most aggressive people are on top.  Works every time.

Mr Craig then asked Mr Slater who was fair game.

“Well, if they’re standing up on a platform of conservative values – hate the gays, all of that sort of thing – and then in the background their personal life is a complete and utter wreck where they’re trying to get their leg over with various different people, then they’re a hypocrite and they become a target for a story,” Mr Slater said.

Mr Craig asked if there were any rules.

Mr Slater responded: “Well, there’s plenty of court cases that say politicians are public property. If you put yourself out in public, then yes, you get a free hit but you still have to stay within the bounds of the law. You have to tell the truth, you have to follow the laws of the land but basically, just because someone doesn’t like what’s being said about them, doesn’t meant it’s defamatory.”

Although there seem to be different rules.  If you are a champion of free speech on the right you are still entitled to seek name suppression even if if you were involved in an attempted hack of a left wing site.

Later, Mr Slater summed up his views on politics.

“Politics is about actions and reactions and there’s this ‘motherhood and apple pie version’ that some politicians have that’s rather quaint – that we should all hug each other, and eat apple pie and thank Mum for it all and be pleasant. Politics is a dirty, despicable game and it’s played by dirty despicable people and they can be of any persuasion – left, right, whatever. But if you don’t acknowledge that’s what politics is about, then you’re going to get nowhere.”

If you or your party has this view then for the sake of our democracy you should be marginalised.  And any party that uses your services should be punished.

Interestingly Cameron let out readership statistics which cast some doubt on his claims about his blog’s popularity.  From Stuff:

I wrote a few posts that at best, 6000 people read. It was a massive overreaction on your part and made worse by the fact you lied about me.”

The resources being expended in this trial could provide many kids in South Auckland with breakfast.  Craig and Slater ought to reconsider their priorities.

22 comments on “Slater v Craig – battle of the has beens ”