In Ponsonby there is a bloody great big hole which is all that remains of the unlamented DYC  Vinegar factory. It has been affording the locals some amusement between bouts in hearings.

The site was to be a $250 million mall. The hole was dug last year. However it stopped abruptly when the development group Marlin lost a resource consent to increase the height of the complex above the 15 metre height restriction for the Ponsonby ridge. The hearing for this was held after Marlin had started construction.They already had a consent that was more in keeping with the nature of the area.

Marlin cited financial difficulties. However it is hard for an outsider to the dispute like myself to avoid the conclusion that Marlin were game-playing the consent process. And when they failed, construction stopped, and they are now hoping for a different result in the Environment court. In all of the whining that one hears from the developers about the Resource Management Act, they are usually the victims of their own mis-behaviour. The whole point of the Act is to allow people who will be affected by neighbors actions effective recourse without having to spend years in court or doing an Arthur Dent in front of the bulldozers.

In the meantime, locals have been having fun with the mosquito generating eyesore.

In March taking a cue from some inspired graffiti saying “I wish this was a swimming pool” referring to the enormous pool of water at the bottom of the hole, the swimming party was held. Granny Herald has a report on the Sohole party (the development is called Soho Square). An amusing farce followed with trespass notices as reported by The Aucklander. 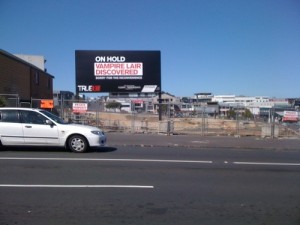 However this is all too mundane. Prime has suggested another reason for the hole. They have a billboard on the site saying “On Hold. Vampire Lair Discovered”. It is advertising True Blood, which is sort of a steamy soap opera with fangs set in the US south (I avoid it, Lyn is addicted).

Since I’m now within the shadow of the proposed building, I’ll be taking more of an interest in the exercise of local democracy. The original consent I have few problems with. The configuration that was turned down I have a lot of issues with.