Last month’s Time magazine has an article that starts “to understand why the United States is losing in Afghanistan…” It’s a bombshell phrase, all the more for the fact that the reporter makes the statement in passing, as accepted fact.

The article goes on to detail how Western money is going to fund the Afghan insurgency, which fights under the loose banner of the Taliban. Local units are expected to be self-sufficient and they get their funding by running protection rackets. Western governments give money to NGOs who hire local sub-contractors for development work. The insurgents demand payments from the local contractors in return for not attacking their projects. The money ends up being used to buy explosives for IEDs and other weapons for attacks on Western military in the country. The West is funding its own enemy. 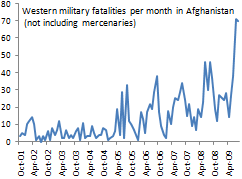 It’s just one way in which the mission in Afghanistan is fundamentally screwed. The West, including our SAS are not there fighting terrorism, they’re fighting nationalists who have a pool of manpower that is for all intents and purposes bottomless. More of the country is a danger zone and more troops are being killed.

To more and more people this is beginning to look like a classic case of a superpower and its allies overreaching, starting off with a small objective only to get embroiled in a struggle for power between competing factions. Just like in Vietnam. And like that war, it’s increasingly unclear that the native ‘good guys’, the ones our soldiers are going over to fight and die for, are really so good. Karzi’s corrupt, the elections were more dodgy than Iran’s, and abuses of human rights are being perpetrated and legalised by the government.

Against this background, our government has sent troops back in with a combat role with the same ‘relaxed’ attitude that Key takes to everything. He doesn’t even know the name for the people of the country, he thinks we’re fighting for the ‘Afghanistanians’. It would be funny if lives weren’t at stake.

The Government, and the Right in general, don’t seem to weigh up the pros and cons getting involved in a conflict. They’re always for going in, whether it be Iraq, Afghanistan or anywhere else. They’ve never met a war they didn’t like.