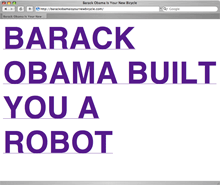 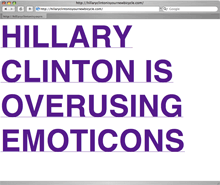 I bookmarked barackobamaisyournewbicycle.com last week but forgot to post on it in amongst the (not over yet) story of John Key’s admission that: “we would love to see wages drop“.

When you hit reload the web site displays a new complimentary message about Mr Obama.

The Chicago Tribune has the full story on the site, which it turns out was set up by Mathew Honan, a contributing editor to Wired magazine:

I came up with the idea for the site last week, on [Wednesday, Feb.]13, while riding the bus up Market Street on my way home for the day. My wife is an avid cyclist, and loves to talk about bikes and cycling. Recently, she’s gotten really active in the Obama campaign, and I had been kidding her that “Barack Obama is your new bicycle.” There seem to be a lot of people who feel that way.

I told one of my friends about it, and it made him laugh too. And then the idea just sort of fell into place. I got home, registered the domain, and had everything up just as it is now four hours or so after I thought of the idea. Needless to say, I’m pretty surprised at how it took off.

I thought it was something my wife and friends would get a kick out of, but I had no clue it would be all over the blogs and news sites. There are even sites in Italy, the Netherlands, and France linking to it.

Now there’s a site up for Hillary Clinton too, but the messages aren’t quite as nice.