Speak up, Pita. We can’t hear you

TVNZ reports: “Associate Education Minister Pita Sharples has labelled the National Standards policy as damaging to Maori but later refused to comment after being shut down by the Prime Minister.” 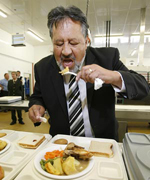 Sharples found life as a minister a lot like prison, except the food at Copperfields was worse

Well, Pita, points for having your heart in the right place but how much longer will you put up with the indignity of being gagged whenever you disagree with Key?

And why did the Maori Party vote for these standards and speak in favour of them in Parliament?

If only Sharples would have the courage to speak up for his people and not back down in the face of Key’s anger. Even if that means giving up the baubles of his mana-diminishing office.

[Update: the latest poll shows Maori support for the Maori Party plunging from 48% to 36%, as voters move back to Labour. Maori don’t want their MPs to be lap-dogs]