I see that the Nats in drag anti-MMP campaign have brought space on our banner. Now I know the mood of the authors on this subject.  They’d like MMP with tweaks – which will happen in 2014.

I looked at the anti’s pathetic ad, and decided that it was more effective to take their money, counter it (like the Standards enhanced logo?) and comment on it.

Oh dear. This is not what National needed on the back of Goff besting Key in the first debate. National’s new TV ad is on the world-class infrastructure they claim to have built. But it was all planned, funded, and mostly built by Labour. Have National accidentally revealed their real achievement: taking credit for others work?

Not quite beyond parody 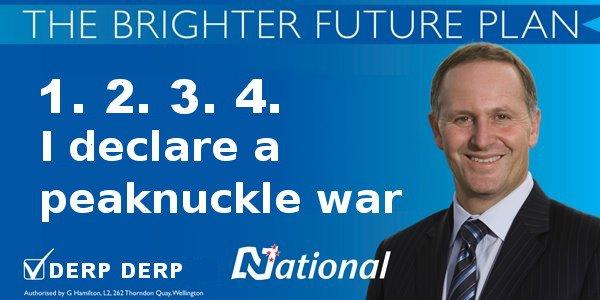 There’s almost too many excellent parodies of National’s silly billboards and ads.

A campaign launch for the times

Labour’s cleverly wrong-footed Brand Key with a policy-based campaign launch. Key will look out of touch playing messiah at his campaign launch while the economy burns. Labour’s ads are great. The Tories are in panic mode: they don’t feature Goff enough moans Key; they feature Goff too much cries Clare Robinson; the lighting’s wrong whines Hoots. They’re afraid to take on the message.

Always look on the bright side

Who do you want answering the phone?

Just received this parody of Hillary Clinton’s 3am ad, but with a New Zealand twist. Very funny.