Tax reform for everyone, not just the rich

Why is it that whenever you see discussion of introducing capital gains tax, land tax etc, the assumption is always that the money will be used to cut the top tax rates?

That seems completely misguided to me. Why should tax reform be all about taking tax burden off those most able to bear it? Taxes to disincentivise housing as an investment won’t only be borne by housing investors. In fact, the Tax Working Group says the effect of closing the tax breaks for housing will be regressive (ie take a higher portion of the incomes of people on low incomes than those on high incomes) because there will be pass-on to rents. So, if the new taxes, as desirable as they are, will be felt by a broad section of the population, why should the counteracting tax cuts only go to the wealthy elite?

Serious consideration should be given using the revenue from new property-based taxes to pay for a tax-free income tax bracket. OK, let’s say the combination of new taxes brings in $2 billion a year. If that money is used to cut the upper tax rates the top tax rates could be cut to 26% but three out of four people would get nothing, most of the rest get less than $20 a week, and 1.5% of taxpayers make off with tax cuts averaging $178 a week. A tax-free bracket up to about $5,300 would cost the same amount and would give everyone $13 a week. 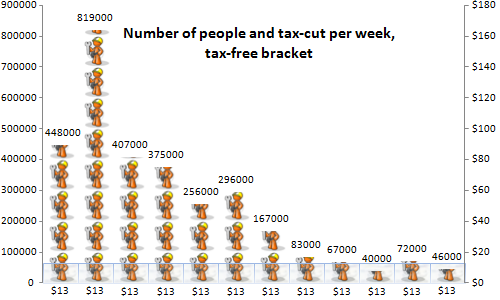 Now, which sounds fair to you?

42 comments on “Tax reform for everyone, not just the rich ”