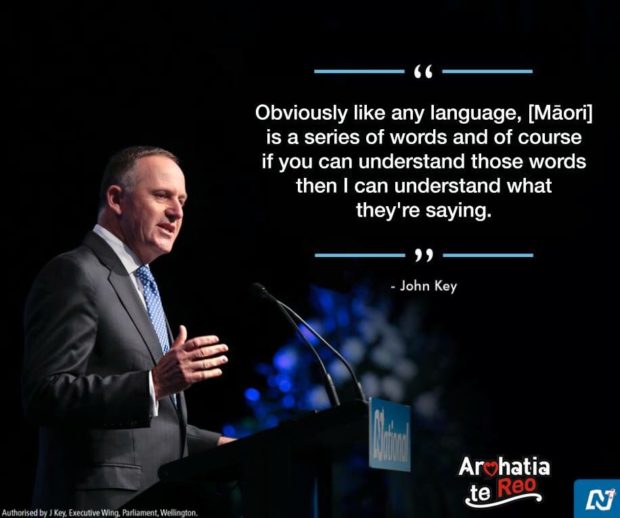 It is te wiki o te Reo Māori or Maori language week.  Make sure that you use te Reo Māori as much as possible.

Te Reo Māori is of course one of our country’s treasures.  As the Waitangi Tribunal said in one of its most important decisions:

The ‘guarantee’ in the Treaty requires affirmative action to protect and sustain the language, not a passive obligation to tolerate its existence and certainly not a right to deny its use in any place. It is, after all, the first language of the country, the language of the original inhabitants and the language in which the first signed copy of the Treaty was written. But educational policy over many years and the effect of the media in using almost nothing but English has swamped the Maori language and done it great harm.

We have recorded much of what we were told of the effect upon Maori children of our educational policy and it makes dismal reading. It seems that many Maori children leave school uneducated by normal standards, and that disability bedevils their progress for the rest of their lives.

We have recommended that te reo Maori should be restored to its proper place by making it an official language of New Zealand with the right to use it on any public occasion, in the Courts, in dealing with Government Departments, with local authorities and with all public bodies. We say that it should be widely taught from an early stage in the educational process. We think instruction in Maori should be available as of right to the children of parents who seek it.

The Tribunal did not recommend that its learning be compulsory but the decision is now 32 years old and it is time to review this issue.

To make matters awkward for National Nikki Kaye’s Education Amendment Bill was recently selected for consideration by Parliament.  The bill establishes a minimum of 10 national priority languages, including te Reo Māori and New Zealand Sign Language among a list of languages to be considered by a school.  A priority language is then selected and the school is obliged to maintain and support a priority language programme.  We could have French and not te Reo Māori selected the way I read the bill.  Compulsory learning of a second language will be in force, but the language may not be te Reo Māori.

And Simon Bridges has made a statement that appears to potentially contradict Nikki Kaye’s effort.  From Dan Satherley at Newshub:

“I don’t support compulsory, never will,” Simon Bridges told The AM Show on Monday.

“I think it’s great there’s a renaissance in the language, that more and more people are seeing the importance of it. I think what’s really pleasing is people are doing this off their own bat.

“My children, it’s amazing – they can speak Te Reo much better than I can, and actually a bit of Mandarin. That’s great – but not compulsory.”

Labour has been somewhat supportive whereas the Greens have been much more assertive and want Te Reo Maori to be a core curriculum subject in the not distant future.  Peters is opposed.  The joys of coalition Government …

If you want to practice your Te Reo and make a public commitment to doing so this handy site has a lot of information and resources.