The boy from Matamata So the first post election media fascination has broken out and it involves Chris Liddell, a kiwi who serves in Donald Trump’s cabinet as deputy chief of staff.  He has been nominated by Donald Trump as a possible replacement head of the OECD.

His back story does not read too bad.  He has in the past been involved in a number of signficiant environmental projects and has shown some largesse to his old school Mount Albert Grammar and his old university Auckland University.

But he remains a member of one of the most dysfunctional and dystopian US administrations ever.

Being part of that administration ought to make you ineligible to work in a McDonald’s franchise but there is one particular decision he was apparently involved in that is being held up as a reason for his candidacy not to be supported.

He may have been in the room when the decision was made to forcibly separate children from the parents of immigrants entering the United States without a permit.  This was the policy driven by Stephen Miller, a replicant if ever I saw one.  It has caused intense suffering, in part because the Administration is that incompetent and that indifferent it did not keep track of which kid belonged to which parent.  Despite being ordered to reunite them, 545 children remain separated from their parents.

The Hill has this description of the decision:

Eleven of President Trump’s most senior advisers met in the White House Situation Room in early May 2018 and were asked to vote on family separations, two officials in attendance told NBC News. The meeting was led by senior advisor Stephen Miller, who reportedly expressed anger toward then-Homeland Security Secretary Kirstjen Nielsen.

The meeting came about a month after the Trump administration instituted the “zero tolerance” policy, allowing it to prosecute any immigrant who crossed illegally, including those with small children. At the time of the vote, immigrant parents had not yet been separated from their children.

During the meeting, Nielsen reportedly said there weren’t enough resources to separate parents, prosecute them and reunite them with their children quickly, the two officials told the network. The Justice Department also said not all parents could be prosecuted in a timely manner, two officials involved in the planning of the zero tolerance policy told NBC News.

Miller alleged Nielsen was stalling before he called for the show-of-hands vote. Most voted in favor of family separations, though Nielsen did not, officials told NBC News.

No adviser argued in the meeting that the action would be immoral, as those claims “fell on deaf ears” in the White House, one official said.

Days after the meeting, Nielsen signed a memo instructing Homeland Security Department employees to prosecute all immigrants who crossed the border illegally, including parents with children.

In June 2018, the president signed an executive order stopping family separations after more than 2,800 children were separated from their parents.

A federal judge ordered the families to be reunited, but there was no plan to track the children or reunite the families, the two former officials said. As a result, it took months to reunite some families, and some parents were deported without their children.

Liddell was one of the people invited to the meeting but it is unclear if he was there or not.  It appears that a spokesperson for the White House took umbrage at the allegation that a show of hands was called for.  It seems they were indifferent to the total lack of humanity shown by the decision.

The Greens have publicly said that New Zealand should not support a Liddell candidacy.  From Henry Cooke at Stuff:

Green Party foreign affairs spokeswoman Golriz Ghahraman said Liddell’s work for Trump disqualified him for the role and that he should not get New Zealand’s support “solely based on his citizenship status”.

“New Zealand just overwhelmingly voted for governance by values that would be eroded if a guy like that was the head of a governance body like the OECD,” Ghahraman said.

“It starts to get a bit scary at a time of pandemic when you look at his role not only in eroding multilateral approaches to things like the Paris Agreement, but in terms of the pandemic response and the attack on the World Health Organisation.”

“We have a responsibility to speak out against that kind of value-set in international governance. It’s quite dangerous to have a person like that leading what should be a co-operative organisation.”

New Zealand’s decision may be less about patriotism and more about politics, as it decides whether a Liddell-led OECD’s agenda would align with that of our Government.

The organisation has been leading a global initiative to ensure multinational companies pay their fair share of tax, but the US withdrew from talks in June and has threatened retaliatory tariffs against countries which unilaterally impose digital services taxes on the likes of Facebook.

The Labour Party has said it is committed to working with the OECD “to get an international agreement that will see a comprehensive regime for multilateral corporations to pay their fair share”, but is prepared to move on its own if agreement isn’t possible.

Act and National have, rather predictably, supported Liddell’s candidacy.  Anything to own the libs.

Act took the opportunity to engage in some Green bashing.  From Newstalk ZB:

The Act Party’s foreign affairs spokesperson Brooke Van Velden said the fact Liddell was “getting more support from Donald Trump than the Green Party is extraordinary”.

“New Zealanders should be united in supporting him. It’s further evidence the Greens should be nowhere near power,” said Van Velden.

And National did as National will do. 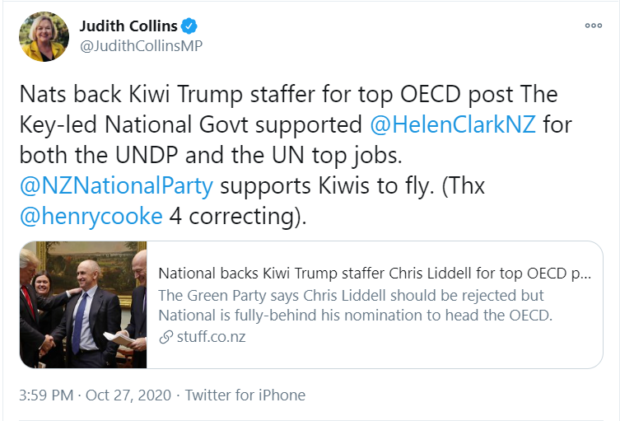 Holy false equivalence.  One was a distinguished former Prime Minister whose humanitarian credentials are outstanding.  The other is a rich businessman who is part of a cabinet that is anti multilateralism and that has made some appalling inhumane decisions.

The Government has not reached a position yet.  I trust this will not be too difficult a decision to make.

43 comments on “The boy from Matamata ”