Justice Coney Barrett appears to be a climate change denier 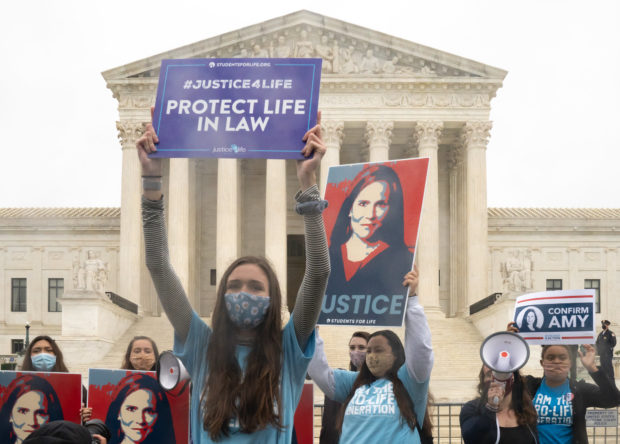 Looks like the future of the United States has been compromised by selection of Amy Coney Barrett as the Supreme Court replacement for Ruth Bader Ginsberg.

The prospect of her appointment caused major concern among a group of science and climate change journalists who have published this remarkable open letter.  From the letter:

The vast majority of the world’s people, including those in the United States, not only acknowledge the scientific certainty of climate change, but also want action taken to address it.

We have succeeded because the science is clear, despite there being a massive well-orchestrated effort of propaganda, lies, and denial by the world’s largest fossil fuel corporations, including ExxonMobil and Koch Industries and fossil-fuel-backed institutes and think tanks. It is frightening that a Supreme Court nominee — a position that is in essence one of the highest fact-checkers in the land — has bought into the same propaganda we have worked so hard to dispel.

And it is facts — a word under repeated assault by the Trump administration, which nominated Judge Amy Coney Barrett — that are at issue here. “I’m certainly not a scientist…I’ve read things about climate change. I would not say I have firm views on it,” Judge Coney Barrett told Sen. John Kennedy during the Senate confirmation hearings on October 13th.

When asked that same day by Sen. Kamala Harris if she accepts that “COVID-19 is infectious,” Coney Barrett said yes. When asked if “smoking causes cancer,” Coney Barrett said yes. But when asked if “climate change is happening, and is threatening the air we breathe and the water we drink,” Judge Coney Barrett said that while the previous topics are “completely uncontroversial,” climate change is instead, “a very contentious matter of public debate.” She continued: “I will not express a view on a matter of public policy, especially one that is politically controversial because that’s inconsistent with the judicial role, as I have explained.”

Judge Coney Barrett repeatedly refused to acknowledge the scientific certainty of climate change. This is an untenable position, particularly when the world’s leading climate scholars warned in 2018 that we have just 12 years to act to bring down global average temperature rise and avert the most dire predictions of the climate crisis.

At the moment when the facts of the case were presented to her, this arbiter of justice freely chose to side with mistruths. Judge Coney Barrett’s responses are factually inaccurate, scientifically unsound, and dangerous.

How can Judge Coney Barrett rule on pending issues of climate change liability, regulation, finance, mitigation, equity, justice, and accountability if she fails to accept even the underlying premise of global warming? The answer is that she cannot.

Their criticism is perfectly appropriate.  Having an open mind does not mean that it has to be completely devoid of any background understanding.  It only requires the ability to change your mind, not refuse to accept that most certain of scientific facts that human induced climate change is happening.  And good background understanding of major issues should be of benefit to a Judge.

The letter did not work but what did we expect?  The Republican Party cannot even deal adequately with the Covid pandemic.  Expecting it to even acknowledge let alone plan to deal with climate change takes a great deal of misplaced imagination.

The letter shows why Coney Barrett’s appointment is so important for Republicans.  She could be on the Supreme Court for decades and during that time it appears she will be a continuous hand brake on what is already emergency action that needs to be taken now to address our changing climate.

Meanwhile elsewhere in the world more advanced leadership are making some profound decisions.  China had during the Paris Accord negotiations pledged to peak its CO2 output by 2030 or earlier if possible.  It has recently significantly improved its position by pledging to be carbon neutral by 2060.  From Aljazeera:

And Japan has also announced a dramatic improvement in its climate change response.

Earlier this year it was criticised for the paucity of its response.  From the Guardian:

Japan has laid out its plans to tackle greenhouse gas emissions under the Paris agreement in the run-up to UN climate talks this year, becoming the first large economy to do so.

But its proposals were criticised by campaigners as grossly inadequate, amid fears the Covid-19 crisis could prompt countries to try to water down their climate commitments.

The UK, which will host the talks, hopes every country will produce renewed targets on curbing emissions and achieving net zero carbon by 2050.

New commitments are needed to achieve the Paris goals of holding temperature rises to no more than 2C, and ideally 1.5C, above pre-industrial levels, as on current national targets the world would far exceed those limits.

Japan’s carbon targets – known as its nationally determined contribution (NDC) in the UN jargon – as announced on Monday morning are almost unchanged from its commitments made in 2015 towards the Paris accord, however.

The country’s target of a 26% reduction in emissions by 2030, based on 2013 levels, is rated as “highly insufficient” by the Climate Action Tracker analysis, meaning that if all targets were at this level, temperature rises would exceed 3C.

But new Prime Minister Yoshihide Suga has pledged for Japan to become carbon neutral by 2050.  Again from the Guardian:

Japan’s prime minister, Yoshihide Suga, has said the country will become carbon neutral by 2050, heralding a bolder approach to tackling the climate emergency by the world’s third-biggest economy.

“Responding to climate change is no longer a constraint on economic growth,” Suga said on Monday in his first policy address to parliament since taking office.

“We need to change our thinking to the view that taking assertive measures against climate change will lead to changes in industrial structure and the economy that will bring about growth.”

To applause from MPs, he added: “I declare we will aim to realise a decarbonised society.”

Covid has provided us with an opportunity to see that a world involving less air travel and less consumption is possible.  It is great that two of the world’s major economies are upping what they are prepared to do.  But it appears that the US of A will continue to be obstructionist.  For a while to come.