The difference between Don Brash and Southern & Molyneux

We are into round two of the debate concerning the right to freedom of speech in Aotearoa New Zealand.

By a cruel twist of fate the subject matter is now Don Brash, former National Party leader, and who previously was the applicant for a super injunction that for a time prevented the publication of Nicky Hager’s book Hollow Men.  Brash is also part of the free speech coalition an entity set up to preserve the rights of Lauren Southern and Stefan Molyneux to insult people and say what they like.  If only Brash was as enthusiastic in protecting the rights of, for instance, Renae Maihi who is being sued by Bob Jones for pointing out that a recent column of his was abjectly racist.

And as Morgan Godfrey and Alexander Bisley have pointed out Brash only supports free speech as long as it is in English.

so, don brash is part of the free speech coalition. funny, because as @alexanderbisley points out, brash only supports free speech if it’s in english.

But the subject of his speech was pretty innocuous. He should have been able to speak.

The question has been asked, can a leftie actually support Molyneux’s and Southern’s rights to freedom of speech but not Brash’s?

That is the situation I find myself in.

With regards to Molyneux and Southern I have said this:

This is why so many of us are so upset at Molyneux and Southern being given air time.  Their claims are stupid, motivated by greed and malice, dangerous, and a threat to our settling sense of multiculturalism.  Most of us want to improve our knowledge of and appreciation of different cultures because they add so much to our way of life.  There is nothing to be afraid of.

I accept that New Zealand has some significant issues to work through but I do believe that we are basically on the right track.  The last thing we need is a couple of fascists to attack what is a central tenet of our way of life.

And dang it but this leftie thinks that we should not have to allow publicly provided facilities to be used for the propagation of monetised hate speech with strict entry requirements.  Especially if they have in the past deliberately picked fights with muslims and acted to disrupt the efforts of others to save refugees from drowning.

They were never stopped from talking.  But I was happy for their ability to speak to be frustrated and for the response to them to be loud and passionate.  Because to me their speech was clearly monetised hate speech and did not deserve to be treated in the same way as honestly held but ignorant views.

My objection to Southern and Molyneux was perfectly captured in this comment by the Failed Estate author Jim Parker:

There’s a pattern emerging. This woman, Milo, the Information Wars guy and Australia’s assortment of provocateurs have latched onto a business model. This involves calculatedly creating outrage to generate notoriety and ‘brand’ awareness. The politics is neither here nor there. What’s important is getting noticed and monetising that attention. It’s the desperate last days of neoliberalism and these outrage manufacturers are the ultimate expression of its bankruptcy as an idea.

Brash is a bit different.  It is not so much a business model, just the overuse of the dogwhistle.

And you have to draw a line.  His speech, particularly about race relations, is often wrong, but at least he is attempting to drum up support for the use of conventional means to achieve his goals.  Trying to get people to sign a petition that is recognised by statute is entirely different to trying to get people to riot for the sake of interesting youtube clips.

The problem is that thanks to the amplification of social media the current left right political split is so intense, and America shows what can happen when the left lose.  The hard right in the States has become particularly emboldened, and race relations as well as the rights of minorities is suffering.  The extreme right is very dangerous. Which is why the left is so focussed on them.  There is a great deal at stake.

And elements of the right are so extreme.

Like Infowars.  It is amazing that Alex Jones should have been able to create a business model out of what he was saying and I am not surprised that his social media feeds have been reversed.  He was just too insane for words.  This particular outstanding effort is today’s winner of the weirdest thing on the internet award but highlights what a waste of broadband he was.

But can I say the left is getting a bad  rap out of this.  We do not necessarily want to ban, just confront.

Like last Saturday in Auckland.  A small group of Fascists gathered for a protest at Aotea Square.  Unite Union obviously heard about it and turned up to oppose.  Someone had designed a wonderful list of songs highlighting diversity and this was played loudly in the direction of the Tommy Robinson supporters.  And people chose to celebrate diversity by dancing.

What was really interesting was the interaction between the groups.  Initially interactions were tense.  As time went by there was a great deal of interaction between the groups and a lot of individual discussions occurred.  By the end of the protest both groups were on reasonable talking terms.  It was a typical New Zealand scene.  I don’t think any minds were changed.  But both sides were prepared to defend and debate their points of view and in the case of Unite with style and passion. 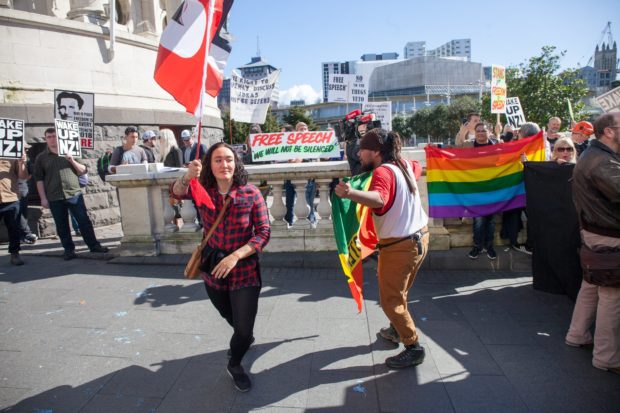 So let Don speak. But don’t expect the left’s response to be quiet or respectful.

66 comments on “The difference between Don Brash and Southern & Molyneux ”