The free speech coalition that is actually quite expensive 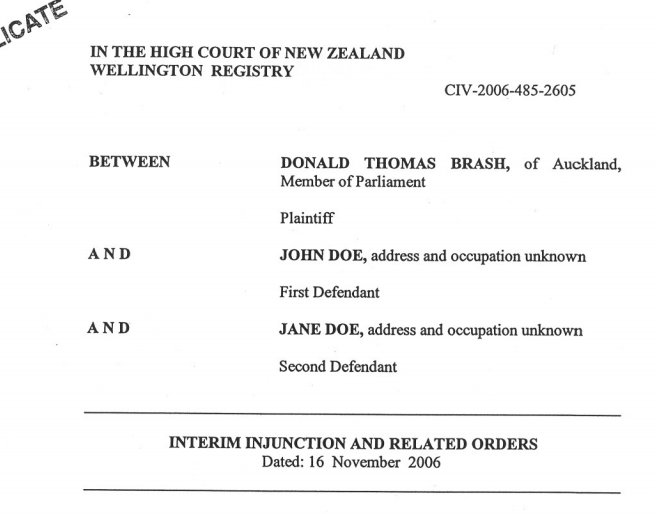 The free speech coalition has appeared, with one purpose and one purpose only, to make sure that the voices of extreme right wing bigots are heard.

Their fundraising prowess is admirable.  They were able to raise $50,000 towards legal fees for a possible court case in only one day.

Their sense of economics is not so admirable, they could hire any number of private facilities for extended periods of time for a lot less than this.  Why not spend the money on expensive lawyers instead, especially if they can possibly cause political damage to Auckland’s labour aligned mayor.

Those involved have a certain, ahem, pedigree.  But not the sort that would make me think they are logical guardians of our rights to free speech.

And he is also totally opposed to the use of Maori.  Freedom of speech as long as it is not about him and is in English.

so, don brash is part of the free speech coalition. funny, because as @alexanderbisley points out, brash only supports free speech if it’s in english.

There is also Ashley Church who thinks that white male privilege is not a real thing.

Also Dr. David Cumin  who thought that the New Zealand supported UN resolution on Palestine at the end of last year unfairly demonised Israel and who opposes “hateful” graffiti that attacks Israel.  Anti Israeli graffiti clearly for him is not the exercise of free speech.

There is Melissa Derby who opposed changing the law so that hate speech against Muslim immigrants could be targeted on the grounds that it was discriminating against Maori.  No I can’t work this out either.

There is Stephen Franks, a former ACT MP and Lawyer whose political campaign team was once implicated in the tearing down of posters containing messages they did not like.

There is AUT professor Paul Moon who thinks that opposing hate speech is damaging to free speech.  At least he is being consistent.

And there is Lindsay Perigo who does not like people exercising their right to free speech on radio stations if they have a kiwi accent.

There is Rachel Poulain who I have never heard of.

Chris Trotter is there.  His commitment to principle is admirable but freedom of speech is only one of a number of important rights and the extreme right use it to attack other rights.

And there is Jordan Williams.  He has some history.  He did not like it when Eleanor Catton criticised National and is not happy about Colin Craig exercising his right to free speech and say not very nice things about Williams.

And where were all these people when Bob Jones was firing legal letters at others who were exercising their rights to free speech?

Their job?  To defend the right of free speech of Lauren Southern.  Someone who says things like this:

[Adolph Hitler was] just an SJW [social justice warrior] who happened to get a freaky amount of power.”

She does not appear to have a huge commitment to the rights of others.

And as pointed out by Brian Rudman in the Herald the commitment of the organisers of Southern’s tour to freedom of speech is not that good either.

I find it droll, that the “freedom of expression” – loving promoter, banned from Auckland Council venues by Mayor Phil Goff, employs the same sort of censorship tactics they’re berating the mayor for using against them.

The “Australia is at a Crossroads” tour brochure, which has the Auckland event tagged onto the end of a list of Australian state capitals, includes the terms and conditions for those paying $86 plus to attend.

The first is that promoter, Axiomatic Media Pty Ltd “reserves the right to refuse entry to anyone.” Then to make doubly sure only like-minded groupies attend, it adds “if someone is deemed to be a risk or disturbance and is asked to leave who has already entered the event, they shall not be entitled to any refund.”

In other words, even for organiser, Australian Christian fundamentalist, Dave Pellowe, who is now calling for lovers of free speech “to stand up and fight back, before it is taken away for ever,” such rights are not absolute. Not when he’s hiring the hall for his Alt-Right circus act at any rate.

He, rather sensibly, doesn’t want mayhem to break out in his meetings. So he’s signalling he’ll toss any dissidents out who might want to exercise their freedom of expression and heckle, or otherwise enter into debate.

Dovil has the best description of what is happening.

Get ready for the court case.