I read a book a while back that was set in the near future after what it called the ‘Domino recessions’ – successive oil shocks had created a series of economic and political crises, each one before the world had recovered from the previous recession. As the second oil shock in three years hits, that scenario looks to be coming to true.

In 2005, oil production more or less peaked. Having grown at an average of 2.4% a year for 40 years, oil output has hovered around the same level for the last six. This lack of additional supply resulted in the market tightening and tightening, and the price rising and rising until a full price shock broke out in late 2007. This put household budgets under immediate pressure – particularly American families in exurbs with ‘sub-prime’ mortgages on houses they couldn’t really afford. Over-indebted families couldn’t pay their bills and afford the petrol their lifestyles were built around. Mortgage defaults grew, banks failed and the value of mortgage-backed securities plummeted. Investors fled to the one thing on the up – oil. The fundamentals of supply and demand led to a speculative bubble that didn’t burst until oil hit US$147 a barrel and the world entered recession.

Now, it’s happening again. Global oil demand fell just 2.6% between 2008 and 2009 but that buffer of extra supply was enough to let the price fall back to US$35 a barrel. Then demand started to rise again, at twice the rate expected, mainly thanks to China. The supply buffer shrunk. Oil prices started to rise, dragging up the price of food (roughly, for every 6 calories in food, a calorie of oil is used in producing and transporting it). Food production has also been hit by climatic disasters associated with climate change. Oil was already flirting with the economically dangerous US$100 a barrel amount at the end of last year.

Whereas the previous oil shock caused a crisis in the financial system, this one has sparked a crisis in the political system of the Middle East (anyone who thinks it’s just a coincidence that governments are falling during an oil and food price shock, or thinks its a coincidence the financial system went into meltdown during the last one is a fool).

Two governments have fallen, another is on its way, up to half a dozen could follow. Libya is the first of the countries severely affected to be a large oil producer. It only produces 2% of the world’s supply and only about half has been affected by the revolution so far but, with global supply so tight, that has been enough to push oil up 20% to nearly US$120 a barrel in the past few days.

Now, OPEC has said ‘don’t worry Saudi Arabia can supply extra oil to make up for any lost from Libya’. And, if you believe the officials, it can because the world has about 5 million barrels a day of spare production capacity and nearly all of that is in Saudi Arabia. However, there’s fears that unrest among the Shi’ites in Bahrain could spread across the causeway to the Shi’ite minority in Saudi Arabia, who live atop the oil fields and make up most of the workforce. And, more fundamentally, no-one quite believes that the Saudis have as much spare production as they claim.

You’re familiar with the classic supply and demand graph – higher price means higher supply. You probably also know that OPEC has a target oil price that it says it can target by altering how much oil its members produce. Well, look at how Saudi oil production actually responded to the last oil shock. 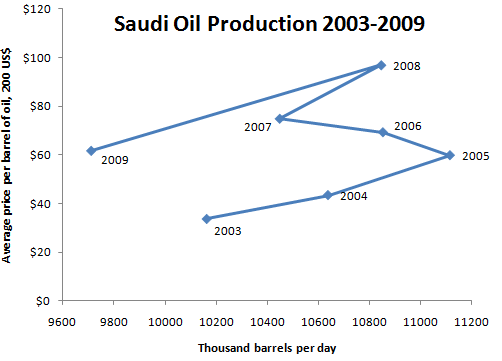 It didn’t increase, it hit a wall at about 11 million barrels per day. Indeed, even in 2008 when Saudi Arabia could sell its oil for a record price it didn’t match production in 2005, when the price was half that level. Which suggests Saudi Arabia doesn’t have 4 million spare barrels per day of production up its sleeve, or it won’t pump it because the Saudis know its worth more in the long-run if its left in the ground for now.

What’s behind the dramatic increase in oil prices in the last few days is investors (yes, speculators) betting that turmoil in the Middle East will continue to affect oil supply and Saudi Arabia won’t be able to make up any shortfalls. They’re betting that the ‘spare 5 million barrels’ doesn’t really exist.

Analysts are saying oil could hit US$200 a barrel if more oil producers have revolts. But I think a global recession would be triggered long before that level. Indeed, with the UK, Australia, and New Zealand already in recession, I think that if the price stays where it is for long, the whole developed world will quickly double-dip.

Every extra dollar on the oil price represents an outflow from New Zealand of $100,000 a day (we have net oil imports of 100,000 barrels a day). The $20 increase we’ve just seen is $2 million a day, or 0.3% of daily GDP. Every other net oil importer is experiencing the same thing. Governments’ books are already strained, as the all households’, except for the rich elite.

We’re in a far worse position to handle this oil shock than we were the last one. It looks like the next domino is falling.

67 comments on “The Domino recessions ”