The Donghua Liu letter – is that it?

I have been around at the Mt Albert electorate office over the last 25 years voluntarily helping them out with their balky computer gear many times.

So David Cunliffe is possibly wrong when he said that he dealt with Donghua Liu. A letter has mysteriously appeared at an exquisitely sensitive time. The letter asks for “an estimated period of time in which [Mr Liu] could expect a decision in his case”. There is no expression of support for Mr Liu’s application in the letter. From my knowledge it is the type of form letter that is sent out from electorate offices every day. I’ve seen them in jammed printers and stacked on electorate office desks in piles.

The letter was signed by him back in 2003 – more than 11 years ago. He was a busy backbencher with a large constituency workload. Dozens of similar letters would have been sent each week. The vast majority would have been prepared by his staff, shoved in front of him, and signed. In all likelihood he never met Donghua Liu.

I have been around at least scores of similar immigration interviews happening by staff and no MP in the 1990s and 200os. As far as I could see Helen Clark only ever got involved in immigration cases after they had the information back from exploratory letters to immigration, and when something appeared to be out of order. I don’t imagine the procedures were any different in neighbouring New Lynn.

Electorate MPs always have a great deal of trust in their electorate staff. They really don’t have any choice. They have competently handled thousands of individual constituency cases of which this looks like only one. In all likelihood David never met the guy, and only saw the form letter to sign. 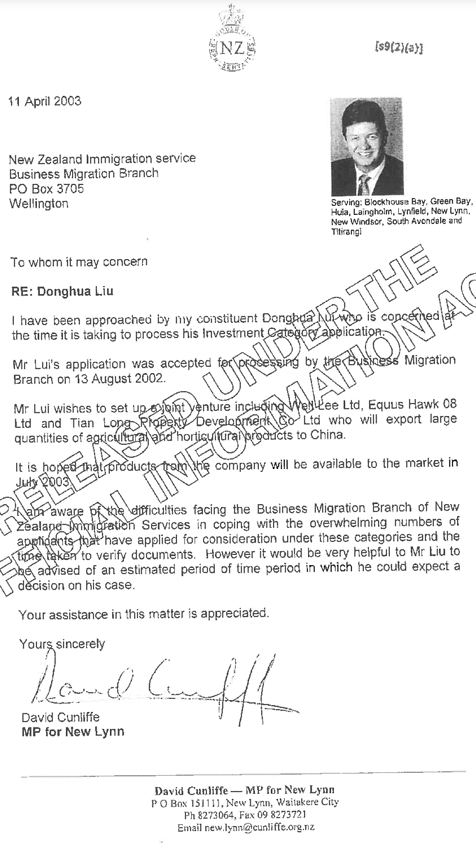 What is interesting about this is the sequence of events that just shout that the National researchers found and gave this information to their patsies in the media and blogs.

That is why they have been running this story arc about Liu for the past week or so. David Cunliffe was asked yesterday if he had advocated on behalf of Mr Liu. He said no. I am quite sure that he would have forgotten about this letter which was written more than a decade ago. In any event there is no element of advocacy in it.

You have to admire the ability of the Government to sift through huge amounts of information, find little tidbits, seed questions for the media to ask and then drop information to reinforce a manufactured meme.

Not to mention that Cameron Slater, personal buddy of John Key, has been chortling over this for a month. I’d love to see the timelines of the patsy reporter at the Herald compared to the blabbermouth at Whaleoil.

The problem is that the big issues are being ignored. Perhaps that is the intent.