The dump of the #sheepgate papers 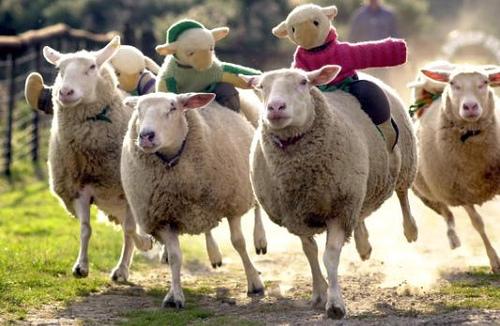 There are a few tell tale signs showing when National is in trouble.

For instance dumping a huge amount of paper at the one time during a week when Parliament is not sitting and the responsible Minister is overseas apparently without access to a land line so that he is unable to give media interviews are all pretty good indicators.

Another sign is John Key claiming either Labour does it too or it is all Labour’s fault.  An example of the former is when he said that Labour also engaged in dirty politics.  The lack of any example of a parliamentary coordinated hit job on individuals using social media did not matter.  And he talked up allegations of Donghua Liu making large donations of money to the Labour Party despite the fact that the only verified political donation made by Mr Liu was one of $25,000 to National in August 2013.

So with events over the past 24 hours you can see that National is in trouble over Sheepgate.  Parliament is not sitting, McCully is overseas somewhere where there are no phone lines and Key is saying it was all Labour’s fault.

Radio New Zealand has reported Key as saying this:

And they were the people who deliberately, and I say deliberately, having changed their position, decide to do a complete 180 and not find a decision, made sure that the Saudis did not find out about it until they had made that decision public.”

But the only proof of a change in position is that by National ministers.  Again from the above Radio New Zealand article:

The documents show that in 2010, three National Government cabinet ministers met to discuss the restarting of live sheep exports two years later in 2012.

Ministers David Carter, Murray McCully and Tim Groser talked about a possible 15,000 to 25,000 live sheep being sent, as long as the shipment met World Organisation for Animal Health standards.

Those shipments never went ahead.

Get that?  The only sign of a change of position is that by National in 2010 when then Agriculture Minister David Carter began negotiations with the Saudis to lift the ban on live sheep export despite saying publicly that the ban would not be lifted.  The subsequent reimposition of the ban clearly annoyed the Saudis.  To use Key’s words Carter clearly changed his position, decided to do a complete 180 and not find a decision, and made sure that the Saudis did not find out about it until after the decision was made public.

The papers also reveal that the Auditor General was consulted about the proposed payments to the Saudi sheep farmer and expressed deep reservations.  From Stuff:

Doubts about the legality of live sheep exports were expressed by the Auditor-General, more than a year before the Government sent 900 ewes to Saudi Arabia.

In a major release of official documents, notes reveal in August 2013 Auditor-General Lyn Provost had concerns that the deal with an influential Saudi businessman at the centre of the long-running saga was “weak”.

She also registered significant concerns that the independence of her office could be compromised by the meeting, and the export of live sheep might be illegal.

The media is starting to see through Key’s lies.  Barry Soper has said this about Key’s claims:

It’s clear Government claims they were responding to a threat made to the Clark Government of a $30 million lawsuit over the axing of live sheep exports aren’t credible.

It would seem the $30 million was mentioned just once in papers from Murray McCully’s office, long after Labour was voted out and bearing no relation to a threat of that time.

David Parker has summarised the transaction with typical sharpness.  From Radio New Zealand:

He said people were right to be incredulous that New Zealand would spend millions of dollars building a farm in the desert and flying sheep on Singapore Airlines.

“It just doesn’t make sense, and that’s why people are right to be suspicious that this is not what it seems,” he said.

National would have us believe that it has spent $11 million on setting up a sheep farm in a saudi desert where most of the lambs died to settle a non existent legal claim that was never lodged and was statute barred in any event.  The reality is that it is the payment of a bribe and there never was a credible legal threat at least one that Labour was responsible for.

In civilised nations Ministers are sacked for this sort of behaviour.  And Prime Ministers do not tell lies.

97 comments on “The dump of the #sheepgate papers ”