The end is near for IE

I was having a look at the browser statistics for the site, and thinking that Internet Explorer was dying really fast. You can see what I mean by looking at the stats from the past about what was used on the site. This is the browsers back in July – September 2010 by session. 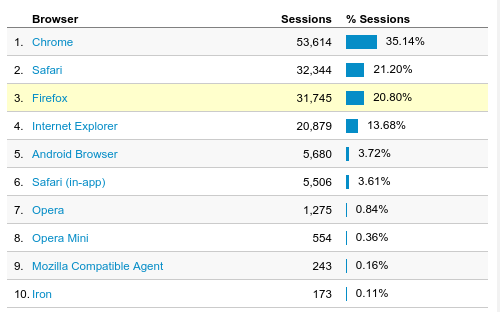 A teeny difference. Speaking as someone who has had to develop web pages for many years for various purposes, all I can say is “good riddance”. Since 2005 I have mainly had to develop in firefox as the standard which did almost all other browsers as well. Then I’d develop the Internet Explorer variants. Which would generally take double the time.

But you can see why Microsoft is going to use a new browser engine and framing. From wikipedia..

The last release is Internet Explorer 11, with an interface allowing for use as both a desktop application, and as a Windows 8 application.

Spartan (or whatever its marketing name will be) follows the requirements for modern web browsers.

“Spartan” uses a new “Edge” layout engine forked from Trident[9] that is “designed for interoperability with the modern web”. The new “Edge” engine will be used by default across Windows 10, and pages can be rendered in the legacy MSHTML engine for backwards compatibility with enterprise-specific websites and software.[1][10]

“Spartan” does not support legacy technologies such as ActiveX and Browser Helper Objects, and will instead use an extension system.[1][10][11]

Early benchmarks of the EdgeHTML engine used by “Spartan” demonstrated drastically improved JavaScript performance in comparison to Trident 7 in Internet Explorer 11, and that Microsoft’s new browser has similar performance to Google Chrome 41 and Mozilla Firefox 37. In the Sunspider benchmark, Spartan is significantly faster than other browsers,[12] while in all other benchmarks it is slower than Google Chrome, Mozilla Firefox and Opera, in some cases significantly.[13]

Anyway, the reason that I was looking was to see what I needed to test. I’ve decided that I’m going to stop testing *any* Internet Explorer variants for any future fixes or development on this site. I can’t justify spending  my valuable development and testing time on such a crap and time wasting browser. This doesn’t mean that the site will stop working on it. It just means that it is unlikely to keep working well.

I’ll add a warning message for the remaining victims suggesting that they download and install a useful browser.