The Essential Forest-Gardener – the humus factor

The atmosphere in a forest garden is very different from that in other gardens; the light is dappled, sound is muted and distant views are masked by layers of tree and shrub. It’s settled and quiet under the canopy of leaves. The ground itself is more absorbent of noise than an ordinary garden, having a much deeper layer of fallen leaves and twigs to soak up sounds that might detract from the ambience. Walking around is quiet and can be done barefoot, at least in my garden where there are no alarming reptiles to keep the wanderer’s nerves on edge.

The effects and advantages of a complex, free-form, exuberant style of gardening are best demonstrated at ground level in the forest garden where everything eventually ends up; leaves, twigs, fruits and nuts, husks and spent flowers, along with droppings from birds, the bodies of insects and all sorts of materials unknown that arrive via the wind. These various deposits are the raw materials for what will become the “mother load” for the garden; the soil and it’s refined components, the most important being humus.

I know there’s debate about what humus is and whether there is in fact something that can be identified by the word, but I’m referring here to the dark, sweet-smelling stuff that’s found in soils that are built through the prolonged and steady build up of organic materials, including but not restricted to those I’ve already listed. Humus, some soil scientists say, is a sponge that holds water like no other substance, creating what could be described as an inland lake below the surface of the soil, away from the water-robbing actions of sun and wind. It’s an elegant description and made more appealing by the addition of the idea that it also holds minerals and nutrients that plants desire, and releases them freely when prompted by the plants.

Humus can be created by gardeners and there are many ways to do that. The forest garden, to its great credit, does it automatically and generously, effortlessly combining a number of processes that require no intervention from the gardener, in the form of compost-making, cultivation or the application of imported materials. It seems the ideal environment for building more ideal environment, in a never-ending cycle of gain and increasing productivity. The gardener needs only to refrain from interfering; cleaning up, tidying-away, burning, scraping, raking, piling up and hauling off. In my garden, the bits and pieces of forest life lie where they fall. More able organisms than me process the spent materials into the water-saving, heat-attracting humus and place it where it’s best deployed. Earthworms and ground beetles move it about, rain drops cling to it, plant roots feed from it.

Humus, mysterious and difficult to define though it is, is very well represented here. I hear it’s easy to destroy; most of the anti-biotic fungicides, insecticides, herbicides and so on, will do it in the blink of an eye. Cultivation knocks it about also, exposing humus to the degrading effects of sunlight. Applying strong doses of nitrate fertilizer which sends bacteria into a feeding frenzy that demands carbon-rich humus for a side dish, strips out humus from the soil like nobody’s business.

All of these destructive forces are foiled by the processes of a forest-garden that needs none of those things to occur. With its humus safely tucked away from harm and increasing from moment to moment, the atmosphere of the forest-garden becomes one of thriving healthiness that can be sensed by visitors who feel the cooling moisture emanating from the soil, breath in the oxygen-rich air and have their foot-falls moderated by the springiness of the ground. I believe also, that the lack of fussiness that results from not wheel-barrowing away every fallen branch and bird-nest, creates a relaxed impression.

If the signs of hard labour are missing; no tyre marks on the paths, spades buried to the hilt in dirt or piles of branches being readied for burning, the minds of any visitors or those lucky souls who live on site, will enjoy a depth of relaxation greater even than they might experience when visiting a park or arboretum where evidence of those activities abounds.

Another factor which has a powerful effect on perceptions in the forest garden, is the paths. Mine are rambling, poorly defined and ever-changing. I don’t cut them or tend to them in any way other than walking upon them, nor do I plan any route. The paths here have all evolved as time has passed, and continue to do so as people go cross-country in order to reach something they’ve seen. Their pushing through, if followed by that of other equally inquisitive visitors, presses down whatever groundcover might be dominant in that area makes a through-way. Preschool children are the best path makers, as they see opportunities for passage that their taller caregivers can’t and are not so bound by convention that they’ll keep to the beaten track. With plants such as wild chervil and alexanders having replaced the various grasses that grew here initially, pathways form easily to the sound of juicy stems crunching underfoot and the light-filtering canopy makes it difficult for any really tough grass to reclaim it’s place along the paths.

You’ll get the feeling, when visiting my place, that life is easy in a forest garden. The effect of all of these things, combined with the shelter from strong winds provided by plantings of flexible, dense flax, cabbage tree and hebe along the windward boundary coupled with the garden’s north-facing aspect mean that it’s calm and warm most of the time. This soothes any furrowed brow that might present on visitors and residents alike, makes nesting a good option for birds, fluttering safely about appealing to butterflies and offers fruit a chance to form on trees that ordinarily grow and produce in warmer climes. 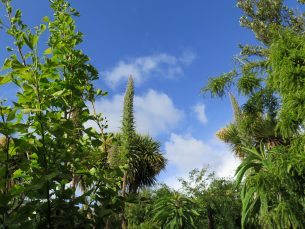 22 comments on “The Essential Forest-Gardener – the humus factor ”